Handicap matches in Xiangqi (Chinese Chess) have been around for centuries. The Secret in the Tangerine and other ancient manuals had chapters devoted to handicap matches.

According to Tu Jingming’s Xiangqi Dictionary, there are many different types of handicap matches, whereby it was often the best of three series with specific stipulations.  (1 页 8-9) 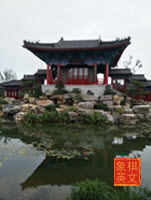 Material handicap matches are matches whereby the stronger player gives up material, which may be one piece or more pieces to the opponent. The player with the handicap would usually take Red, and the game would be carried out as any game of Xiangqi would be.

The most commonly played handicap match would be a One-Horse Handicap Match, whereby Red would start the game without one of the horses.

In some of the handicap matches, to ensure that the handicapped player does not fall too far behind, there are special rules or stipulations. Please refer to the article on the Rules of Xiangqi.

However, there have been extreme cases of material handicap matches.

Perhaps the most famous handicap match in the history of Xiangqi was the one between Grandmaster Xu Yinchuan and Weiqi living legend Nie Weiping (聂卫平) in 1999 at Guangdong. (2)

It was an exhibition match whereby both grandmasters were invited to do battle against each other in both Weiqi and Xiangqi. Xu Yinchuan lost to Nie Weiping in their Weiqi encounter, whereby Nie had given Xu an advantage of nine stones. Nie had defeated Xu Yinchuan easily.

For their Xiangqi match, Xu Yinchuan gave up a whopping NINE chess pieces to Nie Weiping! Xu only had two Chariots, two Horses, and two Cannons to start the game. All the Red Pawns, Elephants, and Advisors were removed from the board. Before their match, in a pre-game interview, Nie Weiping claimed that nobody in the world could defeat him if he had a two-horse advantage. And it was ridiculous that Xu expected to defeat him with a nine-piece advantage! (3)

But… Xu Yinchuan managed to win!

Please see the following board. There was an commentary by Grandmaster Xu himself which the Webmaster has translated into English and added little bits of explanation for the beginner.

Grandmaster Jiang Chuan managed to seal the win even faster than Grandmaster Xu Yinchuan. The match is given below. No commentary was available.

Instead of giving up material, move handicap matches are matches whereby the weaker opponent is allowed to make two or moves as he wished to start the game. There are stipulations to prevent important pieces from being captured by the weaker player.

There are stipulations to Three-move handicap matches. For example, according to Tu Jingming’s Xiangqi Dictionary, the player who starts the match CANNOT move the same piece twice, nor is he allowed to capture any enemy piece. The last stipulation would be that any piece he moves cannot cross the river. (1 页 9)

Handicap matches can be fun in Xiangqi. However, there are still traps that are present, as can be seen from the ancient manuals. In fact, it is known that chess hustlers sometimes would use handicap matches as a means to earn money.

Nevertheless, giving up a handicap is a common way to even the gap between a strong player and a weak player, and this practice has been done for centuries. Handicap matches are one of the more intriguing aspects of the game.