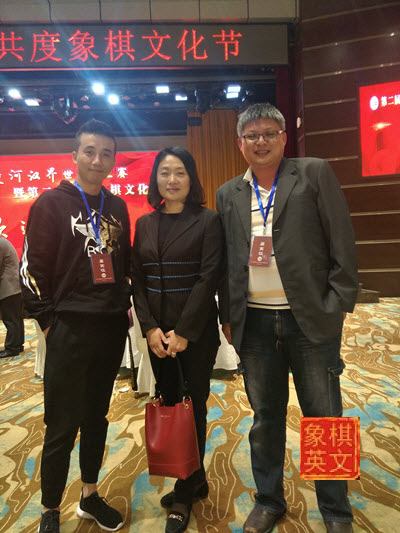 Guo Li Ping is one of the biggest stars in Xiangqi today. She was born in 1974 in Hei Long Jiang but her ancestral roots can be traced back to Shandong. Unlike most other grandmasters, IGM Guo started learning Xiangqi after she graduated from elementary school. However, her talent in Xiangqi was not to be denied and she caught the eye of the North East Tiger, GM Wang Jialiang. GM Wang inducted her into the Hei Long Jiang team in 1988 to be trained under Master Sun Zhi Wei 孫志偉. Under Sun's tutelage and her training in Hei Long Jiang, she blossomed and earned the title of Master in 1992 and then the title of Grandmaster in 1998. She continued improving and won her first competition, a televised rapid chess competition in 1998.

2000 was another good year for Guo as she played a key role in the Hei Long Jiang team that won both the National Team Championships and also the National Athletics Meet. Momentum built and in 2002, she won her first Individual's Champion, where at one point in the tournament, she had seven consecutive wins. It was quite a feat. IGM Guo would repeat her winning ways in the same event in 2004. For her achievements in 2002, she was selected to represent China in the World Xiangqi Championships in 2002 where she became World Champion and was granted the title of International Grandmaster. She repeated her success again in 2004. In team championships, IGM Guo represented the female Hei Long Jiang Team for many times and the team was crowned Team Champions (female section) Championships in the National Team Championships in 2000,2003 and 2005. From 2001 onwards, Guo hosted Xiangqi lectures on television which was one of the most popular programs in its heyday. She became a household name in China quickly and anyone who was interested in Xiangqi knew Guo for her television shows. Currently, IGM Guo is working in the Xiangqi section of the CXA, and has been recently promoted to the division responsible for promoting Xiangqi in the WXF.