Master Xie gets mentioned and acknowledged in an important Chess magazine! Click here...

Birthplace: Wen Zhou, Zhejiang
Titles: Master of Xiangqi (Xie was acknowledged as one of the best of his time, but there were no official titles back then) , International Chess Player
Summary of achievements:
Won the Shanghai Singles Xiangqi competition in 1918. It was one of the very first national Xiangqi tournaments and was supposedly the biggest event in its era. Won the Silver Dragon International Chess tournament in 1936 ( yes, a Xiangqi grandmaster) where players from Great Britain, America, Germany and Austria with an impressive record of 18-1-1
Past Vice-President of the Chinese Xiangqi Association
Co-author of the first Xiangqi manual in print 《国耻纪念象棋新谱》 which loosely translated would mean 'National Disgrace Xiangqi Manual' in 1916.
Invented the huge Xiangqi demonstration board with movable pieces in 1925 that is still widely used today. Before his invention, onlookers often passed comments and disturbed the players when they competed. With his invention, they could play quietly on stage, with onlookers discussing in the audience.
One of the earliest persons to have published a Xiangqi manual and had it distributed to countries outside of China, thus being the very first English Xiangqi book. He had help from a Dane called Charles Kliene who helped translated the book into English. He was a pioneer to help spread Xiangqi to the world. Charles Kliene also taught Xie the game of International chess and introduced Xie to the International chess scene. According to his son, Xie was also the first man to have publicly played blindfold Xiangqi.
First person to have created Chinese charactered Xiangqi composed games 排局.
One of the first pioneers to have introduced International Chess into China. About a century later, China would produce 4 women’s world chess champions like Xie Jun and Hou Yifan who has made recent headlines by becoming the women’s world chess champion at the tender age of 16.
First person to have used Chinese characters to represent the pieces in International chess. Times were hard then and not many could buy the crafted chess sets back then. This helped promote International Chess in China.
Helped amassed millions in donations from overseas Chinese in China’s cause against Japan Nicknames: The centurion Chess/Xiangqi king 百岁棋王, Generalissmo of the Xiangqi World 棋坛总司令

Xie Xiaxun谢侠逊was the perhaps the greatest Xiangqi player in China in the early 20th century. He was born in Pingyang County,Zhejiang Province in China in 1888. His influence on Xiangqi is profound. He started learning Xiangqi from his father at the tender age of 6. By the time he was 12, it was said that nobody could beat him at Xiangqi in Pingyang county. Xie had a few ancient Xiangqi manuals at home where he would studiously read them cover from cover. These books would later have great influence in his life. He first made his mark in national scene where he challenged Chen Sheng, who was a renowned Xiangqi expert in Zhejiang province.

It was said that he was so short when he challenged Chen that he had to kneel on the stool when they played. He quickly gained respect with a one win, one draw and one loss record against one of the top players then. Onlookers said that he showed great courage against Chen, even though he was shivering in fear for a 12 year old. Xie did not come from a rich family, but he managed to get an education in a private school then before dropping out when times were hard on his family. He continued working hard and studied on his own before being admitted into one of the more renowned schools in Zhejiang province when he was 19.

Unfortunately, he was forced to quit to support his family when his father passed away and the family business bankrupted. In 1916, he qualified as an elementary school teacher and started teaching in various elementary schools. However, it was said that his love for Xiangqi caused him trouble at work. In order to make more income, he started to mail Xiangqi puzzles to <<时事新报>>, which was supposedly the third largest circulation in Shanghai at that time. It was also in 1916 that he was recommended by Charles Kliene , a Dane, to be inducted into 万国象棋会 Wanguo International Chess Association, one of the first the International Chess Organizations back then. He was the first Chinese to be inducted. Wanguo International Chess Association produced many good International chess players. But times were still hard. To support his family, Xie went to Shanghai to look for work, and he was recommended to work in the <<时事新报>> by Huang Qun 黄群, who was from the same hometown. Xie Xiaxun was put in charge of the Xiangqi section where he found his niche. China was undergoing a period of turbulence when he was working in the newspaper and he used his influence on the media by publishing many Xiangqi set-up games. Many of these games had patriotic names and openly criticized the state of affairs. They struck a chord with both Xiangqi lovers and non-lovers alike.

Xie would continue to work there and publish many more articles until 1929. His influence on the Xiangqi world grew when he became the first champion in a national tournament whereby the more than 60 of the top players of his time were invited. The year was 1918 and the venue was in Shanghai. It was a turning point in his life as suddenly he became acknowledged as the best Xiangqi player in China then. From 1922-1927, he travelled far and wide to try to collect many of the ancient Xiangqi manuals. He then painstakingly went over each of the manuals, corrected the mistakes he saw, added new comments and complied them into one of the greatest works on Xiangqi ever: <<象棋谱大全>> . It was published in 1929.

Today, many books on Xiangqi still refer to his great piece of work. It is noteworthy to mention that he had a section on International Chess in this great piece of work. It consisted of multiple volumes and was estimated to have over 2 million words. Imagine, such an encyclopedia before the days of the computer or a decent printing press for that matter. Xie then opened a bookstore in Shanghai which folded not long after.

The 1930’s was a busy time for Xie. At that time, there were many Xiangqi lovers in South East Asia. Xie was invited to show his skills in many countries like Singapore, Malaysia, and Indonesia. Times were hard and China was undergoing another turbulent period. The Japanese had just started their campaign in China. Xie volunteered to go to South East Asia where he would try to raise funds with his Xiangqi skills in competitions against local Chinese Xiangqi players. His patriotism was also shown when he openly criticized the Japanese. He made many friends and gained the respect of the overseas Chinese. According to his son, during his trips to South East Asia, he managed to get more than 50 million yuen, and numerous valuables in donations to help the campaign back home. He also managed to convince more than 3300 skilled technicians to return to China to offer their services in the campaign against Japan. And he only accepted a modest 3000 yuan for his services.

An interesting piece of history must be mentioned. In 1935, when he was in Singapore, he was invited to a match by Hunt, who was the Commander in chief of the British Air Force then. Hunt was also the 1934 Malaysian International Chess Champion. It was said that Hunt had heard that Xie was a member of 万国象棋会 Wanguo International Chess Association, but did not believe that Xie was skilled in International Chess. Xie’s son described Hunt as snobbish and looking down on Xie when he challenged him. Hunt even offered to play handicapped against Xie who promptly refused. So a match was set up in Katong Oversesas Chinese Swimming Association. Xie won the match in style by a big margin, much to the embarrassment of Hunt. Xie’s son later recalled that Hunt had tried to salvage his situation by sending pleas to Xie secretly twice to draw the game. Xie forced a draw against another Dutch 1927 champion in Jakarta in about the same period. 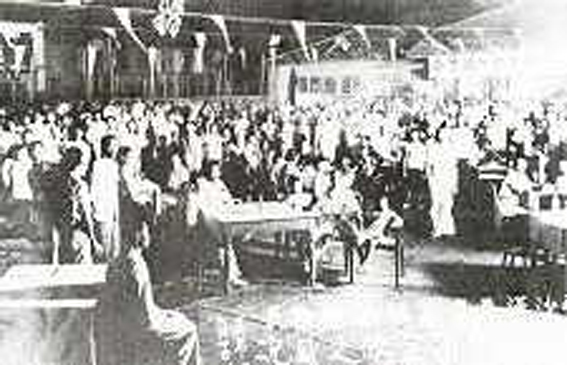 These two achievements stunned the International Chess world then, and prompted the British government to hold an International Chess tournament in Hong Kong called the Silver Dragon Cup. It was an invitation to top players from 5 different countries. Xie was invited to represent China in the tournament with other top players from Germany, the United States, Austria and Great Britain. Amongst them, Weiss was the German national champion. Xie won the tournament with an impressive record of 18-1-1. Xie also beat Hamilton from the US and Hessetie from Germany in 1930. In 1931, he added S Sheephone and William Porter, both from England to his list of beaten players. Another piece of history noteworthy of mention is Xie's encounter with Alexander Alekhine, then the world champion of international chess in 1933. Alekhine visited China and Xie welcomed him. They had a game, but I have yet to find the results of that game. It was said in his son's autobiography that Alekhine was very pleased to find his picture in volume 3 of Xie's masterpiece whom Xie presented himself. Aside from his achievements in Xiangqi and International chess, Xie was also known for his friendship to the late revered Chinese Premier Zhou Enlai. In his memoirs, Xie was full of praise of Zhou. Zhou was also known to have gone to ChongQing Province to have a match against Xie. Xie's influence on the Xiangqi scene did not stop here. According to his son, he was said to have given pointers to a kid by the name of Hu Ronghua... Well, we all know what GM Hu has continued to become. Countless of other players have also benefitted from Xie's promotion of Xiangqi. Other notable names include Xu Jialiang, who won the Chinese International Chess National Competition in 1958 and also other Xiangqi (yes, ambi-chess!) tournaments.

In the latter years of his life, Xie continued to study Xiangqi vigorously and promote the game. He would be made vice-president of the Chinese Xiangqi Association. Even after retirement, when he was well over 80 years old, he was often invited to various schools to give lectures on Xiangqi. Xie Xiaxun died in 1987. A museum has been erected in Xie’s hometown to commensurate his achievements. There is too much to be written on a great man like Xie. Indeed, I think that this autobiography is not befitting enough, but that is all I can do.

Note: There is a series of articles on Xie Xiaxun under the Xiangqi articles section. Click here.

Finally found a short video, in Chinese on Youtube.

Last updated: 9th Jan 2021
Acknowledgements:
Harvey Blume for helping to proofread my horrible English.
Mark Taylor for giving me suggestions and correcting a few mistakes in the original bio that I had done.
Chris Hankinson for collecting and sending me the photos from different websites, pertaining to Xie.

References:
1. In Chinese, http://zh.wikipedia.org/zh-cn/%E8%AC%9D%E4%BF%A0%E9%81%9C#.E7.A8.B1.E8.99.9F.E7.94.B1.E4.BE.86
2. In Chinese, http://big5.huaxia.com/zhwh/sslh/2221126.html
3. In Chinese, <<百岁棋王谢侠逊>> by Xie Ruidan谢瑞淡 (Xie Xiaxun’s son)
4. In English, a recent article on Hou Yifan. Proof of the foundations laid down by Xie for International Chess in China in the 20th century. http://www.nytimes.com/2011/01/09/opinion/09kristof.html?_r=2&ref=opinion
5. In Chinese, http://crhb.xxking.com/News/ArticleShow.asp?ArticleID=11455
6. In English, a webpage mentioning Xie and his secret on longevity: chess!!! http://www.edochess.ca/batgirl/CIP_8.html . Harvey Blume must be thanked for this link.
7. In English, an article by Xu Jialiang on Xiangqi and International Chess back in the 80's. There is mention of Xie. Click here... . This was generously provided by Mark Taylor.
8. Mark Taylor's article on Xie Xiaxun. Click here... Thanks to Mark for acknowleding such an important figure in the history of Xiangqi, and International chess!