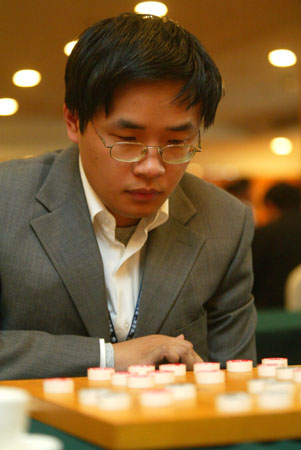 Nicknames: None found yet

GM Sun Yongzheng 孙勇征 was perhaps the hottest player in China in 2011, having just won the Chinese National Xiangqi Singles Championships 2011年第46届全国个人锦标赛冠军. In his autobiography (see ref 3 below), GM Sun noted candidly that there was always a digit "1". He was born in Shanghai City in 1979. Sun was first introduced to Xiangqi when he was just 5 years old by his dad who was an avid Xiangqi fan. As he was able to play Xiangqi at such a young age, he quickly caught the attention of his kindergarten teacher surnamed Wang and was promptly introduced to a local player called Yan Zhigang颜志刚 who became his first Xiangqi sifu. GM Sun noted candidly that he later heard from other adults that his teacher later married his first sifu and their daughter was 2nd place in one of the more recent Shanghai City tournaments. Well, Xiangqi does wonders!

After learning from Yan for some time, GM Sun caught the eye of Master Ge Weipu 葛维蒲, one of the best players in Shanghai, and the author of many many books. Master Ge was not 30 yet when he got to know Sun but he took him under his wing as his first disciple, teaching and sharing with him all he knew. GM Sun improved by leaps and bounds and two years later, he became the champion in the Shanghai City boys division. In September 1990, when he was still junior high, GM Sun was absorbed into a Xiangqi school where he came under the guidance of Coach Ren Guansong 任观松. GM Sun improved dramatically and in August of the following year, he came in third place in the National Xiangqi Youth Championships. GM Sun improved his results and became champion of the same event in August 1994. And GM Sun humbly said that perhaps it was his ethnic origin in Jiangsu that enabled him his win.

For his achievements, he was allowed to participate in the Chinese National Xiangqi Championships the following year in 1995 where came in 11th place out of 86 of China's best that era. He was thus granted the title of Xiangqi Master. He was the youngest Xiangqi master of that time, at age 14. That record was only broken by fellow compatriot GM Xie Jing 12 years later. GM Sun reoollected that as he was the youngest player in the entire tournament, all his opponent's wanted to score quick wins and thus allowed him to spring some surprises. In 1996, there was a huge change in the way players were ranked. There were new rules and the Chinese National Xiangqi Championships were divided into A and B divisions. There were 46 players in the A division but the last 12 players would be demoted to divsion B. GM Sun was now an established player and older players took him more seriously. Coupled with bad luck, GM Sun was demoted to division B. In the same year, 2 months before the National Singles Championships, GM Sun had to fight it out against GM Wang Bin for the right to represent China in the Asian Youth Championships games. He had a huge battle against GM Wang but lost badly with a 1D3L record in a four game match. GM Sun reflected on his immature psyche at that time. In 1997, GM Sun fought and returned to division A (only the top 6 players were eligible for promotion) .

In the 1999 Chinese National Individuals Xiangqi Championships, GM Sun shone again and was placed 5th when it ended. He noted with pride in his autobiography that he was honored to be able to go up against other great GMs like Xu Tianhong , Li Laiqun , Yu Youhua and Zhao Guorong with a 2W1D1L record. It greatly boosted his confidence that he was able to hold his own against the best of the best. He was a star on a rise and was appointed as one of the 4 dragons on the Xiangqi scene that year. GM Sun fell to 15th place in the same tournament in 2000 but rebounded to 3rd place in 2001, along the way defeating GM Lv Qin for the first time in his life. GM Sun mentioned that he was especially inspired by GM Wang Bin's second placing that same tournament, and it boosted his confidence much more. The next highlight in his career was in 2002, where he was eligible to take part in the 13th Yinli Cup.

In that competition, he eliminated GM Wan Chunlin (fellow Shanghai GM), GM Tao Hanming, GM Lv Qin and finally GM Tao Hanming to face GM Xu Yinchuan in the finals. The first three games ended in a draw against Xu but in the fourth game, GM Xu dug deep and pulled out a flying dagger. GM Sun lost quickly and was runner up in that competition, but it was the best result to date.
In team competition, GM Sun especially remembers the National Team Championships in 2003. When the Shanghai team faced the Guangdong team, GM Sun went up against GM Xu Yinchuan again. The Shanghai team were equal in points with 1W1L1D. GM Sun's remaining board would be crucial to the end results. And he won. It was sweet revenge for GM Sun. Shanghai would become champions that year. The feat was repeated again in 2007.

On the international scene, GM Sun represented China to win the 2005 (12th) Asian Xiangqi Singles Championships. He was also a key player on the team that represented China to win the first ever Mind Games in 2008. But all these achievements were paled when compared to what he did in 2011. It was October 2011 when GM Sun won the first ever "Wenling.Changyu Dongtian Cup" “温岭·长屿硐天杯”第一届全国象棋国手赛冠军. He was about to be engaged and it was a swee t time for him. But that was not the end of the story.

In the same month, he became the 15th National Champion ever by winning the 2011 Chinese National Xiangqi Singles Championships. He expressed his gratitude toward GM Hu for his coaching throughout the years.

In the article found in the periodical Qiyi (ref 2), there was a nice story. It was an interview with GM Hu Ronghua. GM Hu said that he had made a bet with GM Lv Qin 15 years ago (1996) that he had predicted that Shanghai would produce another National Champion. GM Hu had dared to make that bet because of his confidence in GM Sun. GM Hu lamented on his loss but was nevertheless ecstatic for GM Sun's ascension onto the Xiangqi throne. According to the periodical, GM Sun married on 30th December 2011. Other gossips (whew...) included a one million yuen encouragement from the Shanghai authorities which GM Hu admitted. And who said that professional Xiangqi players did not make much?

The following video would show a video of a commentary of a match by the grandmaster where he defeated GM Wang Tianyi!