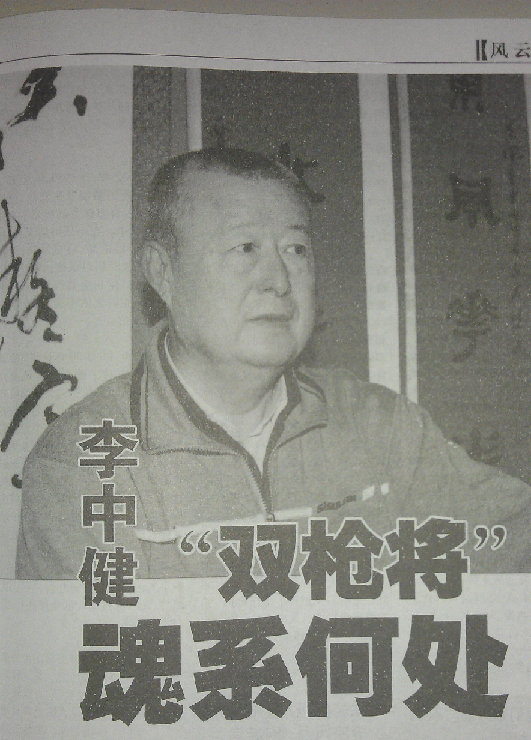 Janggi:
1. Promoted Janggi after retirement in 1995

The photo was from the October edition of <<棋藝>> 2012.
In China, the major forms of chess played are Xiangqi, Go and International Chess. Many people play all three forms of chess but most are adept at only one of the three forms. There are only a handful few who are adept at two or more forms of chess. And to be able to reach Master status in two or more forms of chess is almost impossible, much like being ambidexterous.
This goal has been achieved only by a select few.
Master Li ZhongJian was one of those. ( Shanghai's Xu Tianli 徐天利 is another notable name.) Master Li Zhongjian was born on the 29th of January in 1939 in NingAn County, HeiLongJiang Province China. One of his favourite haunts was the many Xiangqi stalls that were very prevalent back in the 1950's. These were simple tables with Xiangqi sets, whereby people gathered to play. Xiangqi greats like GM Wang JiaLiang 王嘉良, famed Xq player Zhang Donglu 張東祿, famed Xq player and author Jin Qichang 金啟昌 often frequented these stalls to give pointers. In their heyday, it was said that there could have been over 100 people at one single stall, watching a game in progress or participating in the discussion of a game played. Some would climb up trees just to watch a game in progress. It was in such an enviroment where Master Li started out. Li soaked up all the games he watched and played. Later, Li would come under the tutelage of Zheng Yuanchen 鄭元臣, a famed player in Harbin City, whereby Li would improve by leaps and bounds. He quickly gained a reputation and was inducted into the Harbin City Xiangqi Team in the first half of the previous century. He stemmed his name on the local Xiangqi scene by coming in runner up in the first ever Harbin Xiangqi Championships in 1956.

In 1958, Li made it into the Mathematics Faculty of 東北師範大學, and switched to International Chess. His gift for IC was seen as he proceeded to win the Harbin International Chess Competition two years running from 1959-1960. He also came in 7th place in the 1960 National IC compeition and left a mark on the national scene. Unlike other players who would eventually choose between Xiangqi or International Chess, Li continued playing both! He would join forces with GM Wang Jialiang and the late GM Meng Liguo (master of GM Bu Fengbo) to win a Xiangqi championship friendly against the Guangdong team and Zhejiang team in 1961, one year after coming in 7th place in IC! The team was sort of an alliance and could perhaps be known as a North-East Alliance.

While other people (even the legendary GM Hu Ronghua faltered in Xiangqi when he was 'encouraged' to take up Go back in the 60's) faltered in one form of chess, Li proceeded to become better and better in both Xiangqi and IC. He placed more emphasis on IC and achieved better placings in the Chinese IC Championships for the next two decades. It may seem unremarkable, but China had undergone the Cultural Revolution whereby all forms of chess were banned. Li managed to keep his skills before and after the Revolution, when many chess players, both Xiangqi and IC alike were forced into retirement or were never the same again. His Xiangqi skills were still sharp too. In 1973, in a friendly between representatives from Shenyang, Shanghai and Harbin, Li lost very closely to GM Hu Ronghua and Xu Tianli, while beating Zhu Yongkang, Han Fude etc. All these players had come in at least the top 6th places in the National Xiangqi Singles Championships . Li upped his standings in the IC championships ifrom 1974-1979 whereby he had been placed 2nd, 3rd, 4th and 5th place. Perhaps his greatest regret was not having won the 1978 championships for he has led all the way, until the match whereby eventual champion Qi Jingxuan 戚驚萱.

Li's achievements did not stop there. Master Li turned to coaching in 1979, first tutoring the Chinese IC Youth Team. From 1980-1986, he coached the Chinese Women's Team and was instrumental in stamping their name on the International Chess Scene. GM Liu Shilan , GM Wu Minqian were some of the few who had profited from Li's tutelage. The achievements of these two Chinese female GMs are well known and that was from an era way before Xie Jun or Hou Yifan. Li was highly respected for his contributions to IC even in China today.

Outside of the competition arena, Li was also a prominent figure. His genius in composed endgames (排局) is legendary. It was said that he had created about 1000 very practical composed endgames. There have been nothing but praise by other famed endgames specialist for his creations. Indeed, Li had the ability to 'upgrade' classical endgames. With the mere addition of a pawn, or the deletion of another chess piece, Li would be able to greatly increase the complexity of an endgame, breathing life into it.Please try out some of the puzzles by him and you will know why. The puzzle below shows why. In fact, it was said that many professional Xiangqi players could not solve it, and a GM had to labor very hard before solving it (as mentioned in ref 1) .

Li was also generous about his knowledge of the game. He was said to have authored 50 books, having written over 5 million words in total. Indeed, I have always found his books to be hard and nearly unfathomable. Although I have but a few of his works, none have disappointed me. Li was also one of the editors for the puzzles section in Qiyi, perhaps the most influential Xiangqi periodical there is today. Master Li was also an accomplished calligrapher whose writings have been acknowledged. After retirement, Master Li took an interest in Janggi and was said to have been instrumental in promoting the game in China. The legendary Master passed away of congestive heart failure in September 2012.