The Opening Phase in Xiangqi (Chinese Chess) is one of the phases of Xiangqi where most newcomers are interested. In the previous article, the basic terminologies have been introduced.

In this article, the author will introduce the commonly seen opening variations and systems.

This article will discuss the following contents.

It is one of the oldest opening systems in Xiangqi and is still seen in major tournaments.

The development of the Chariots, Horses, and Pawns will determine which variation is played. Generally speaking, there are three major opening lines: 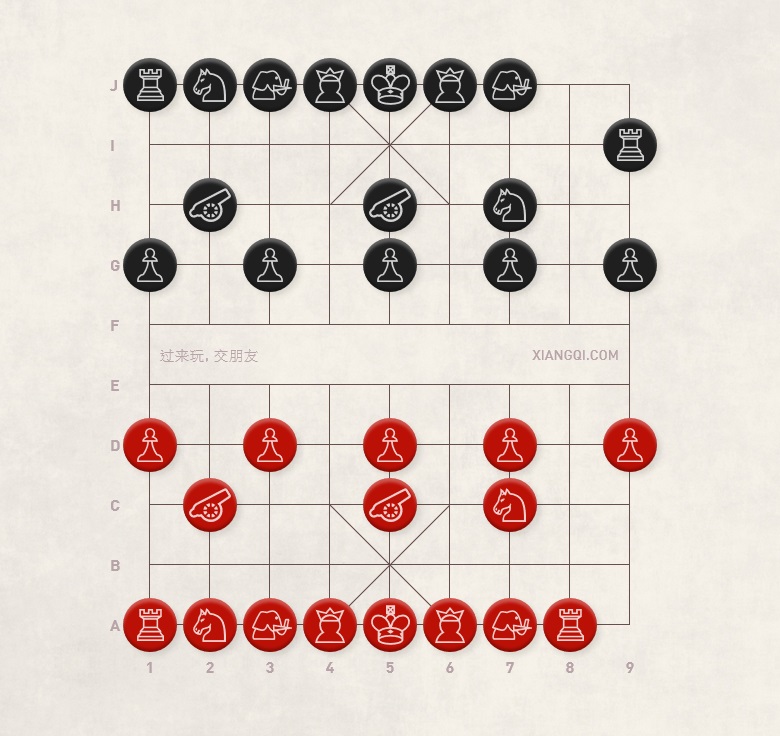 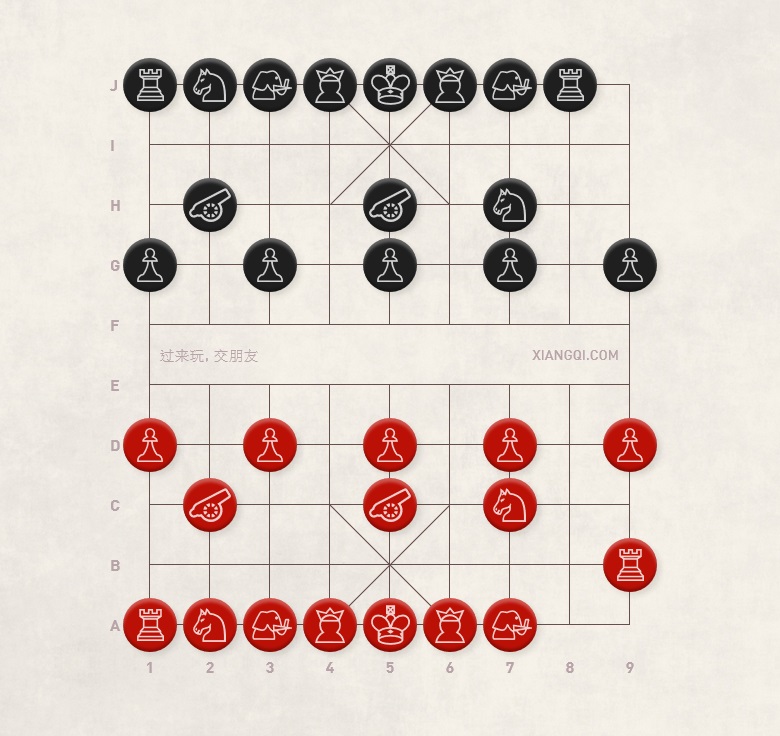 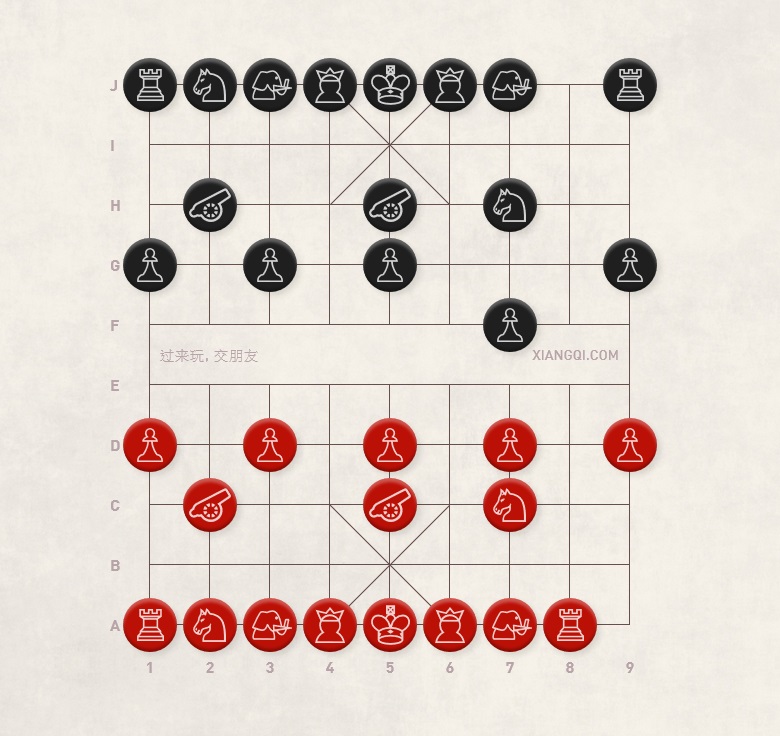 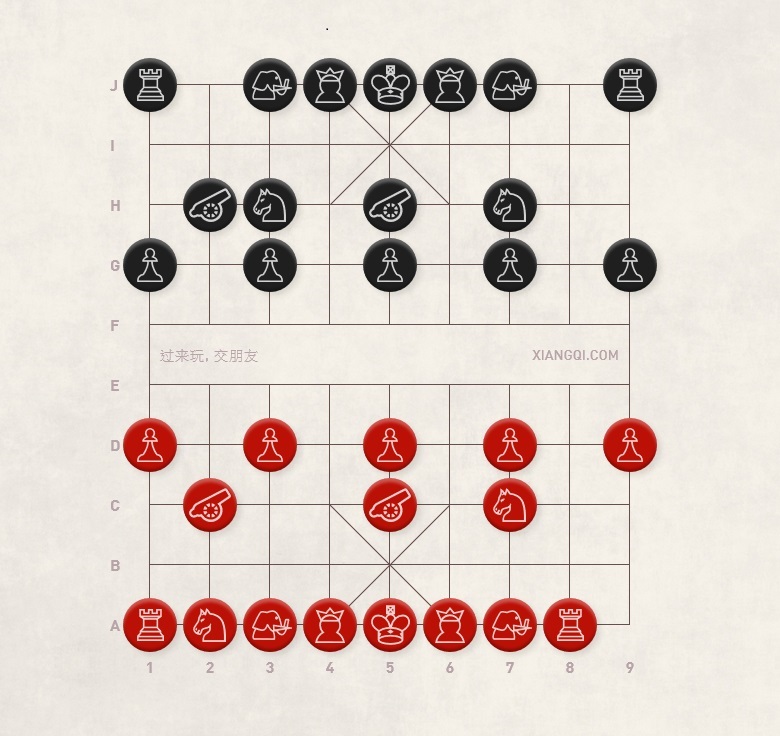 There are two major variations: the Major Variation of the Opposite Direction Cannons and the Minor Variation. 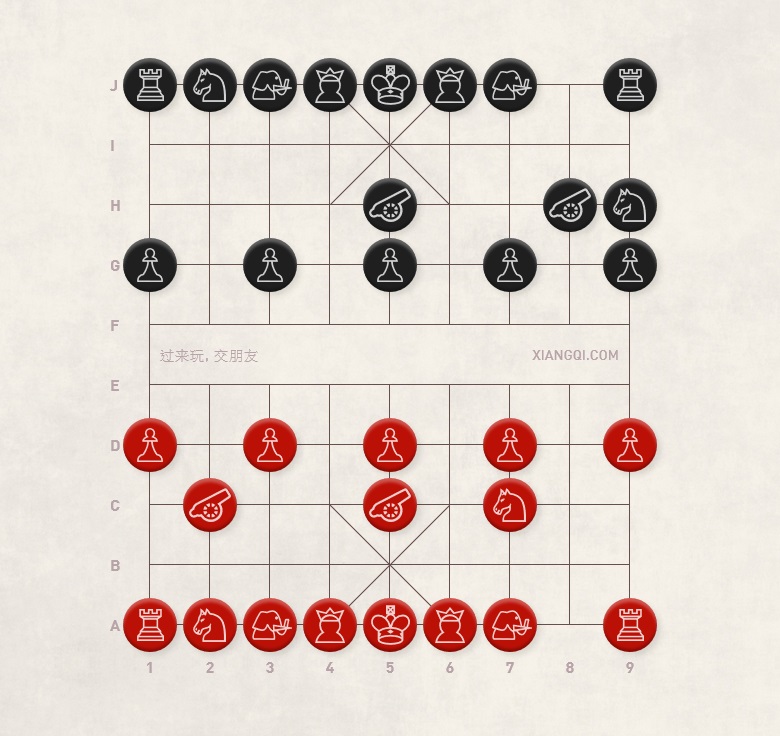 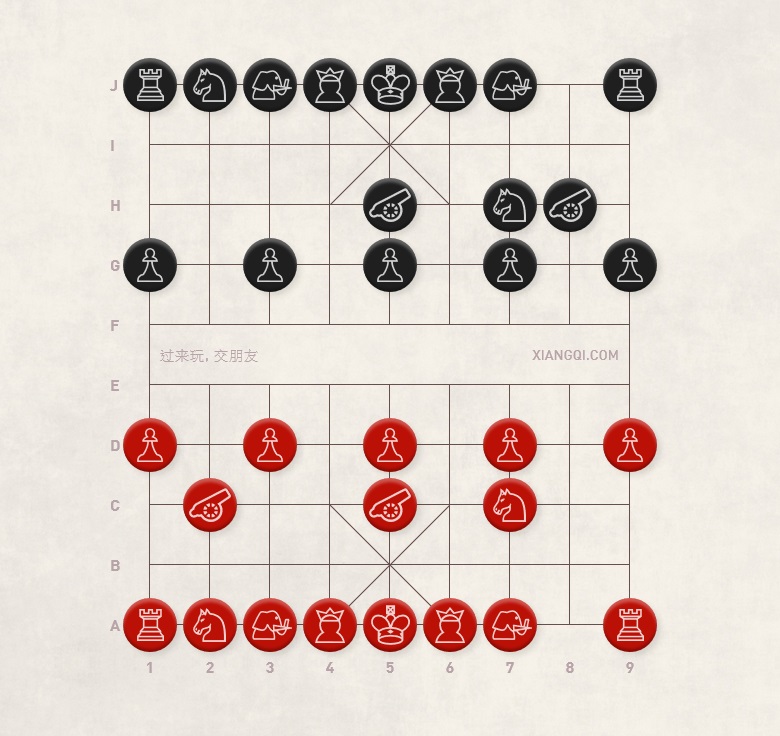 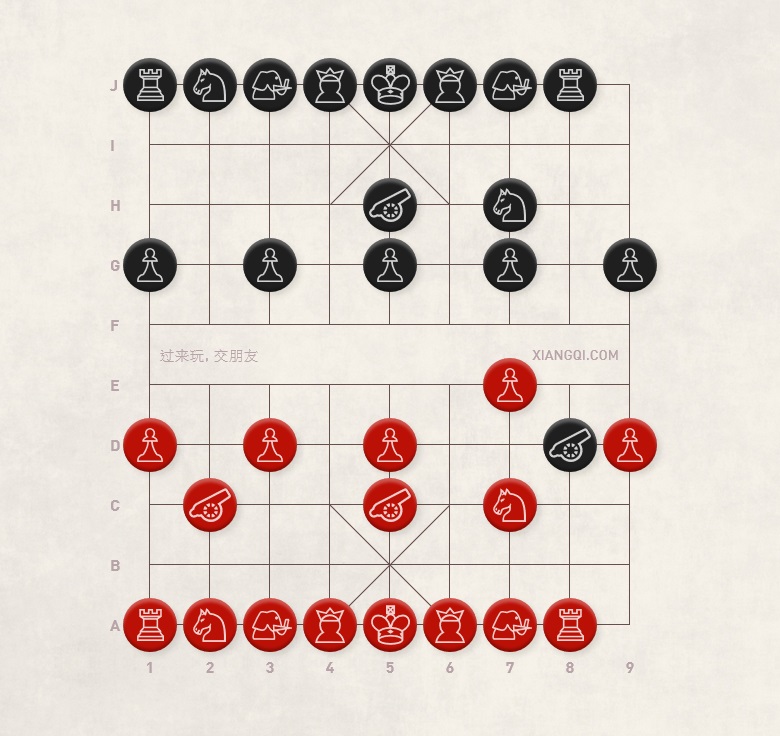 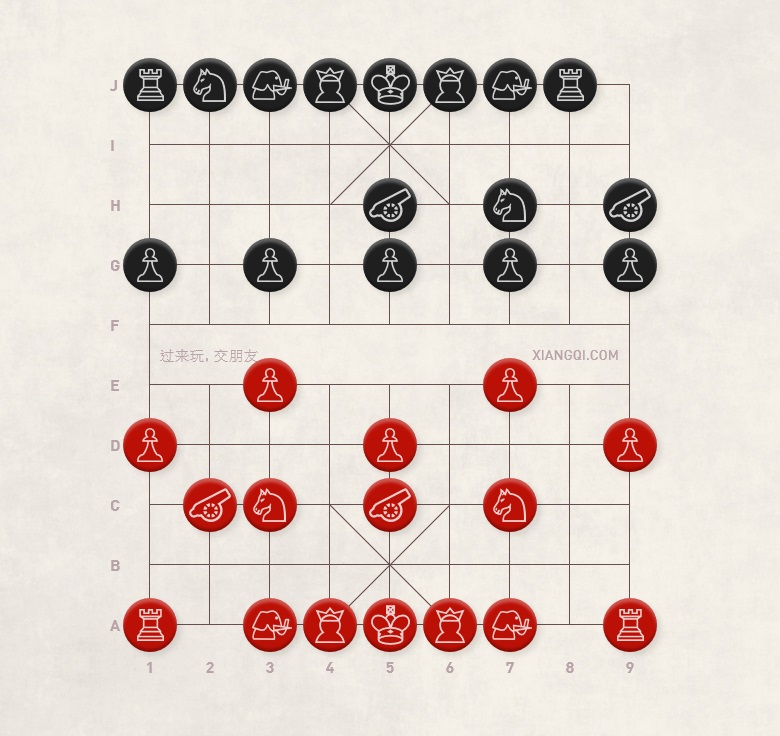 The position is reached by playing:

Since Wang Zaiyue published the Plum Flower Manual, the Central Cannon vs. Screen Horse Defense has become the most commonly seen opening system in all major tournaments today. There are simply too many variations that can be played. For interested readers, the author has written a short article introducing the evolution of the opening system over the past few centuries. Please refer to the following link.

However, the basic formation for Black’s Screen Horse Defense is the development of both Horses as Proper Horses with the Cannons in their original positions. The resultant formation is a screen.

The development of the Horses for both colors will also depend on the Pawns that have been advanced.

It is impossible to include all the various commonly seen variations in this short article. 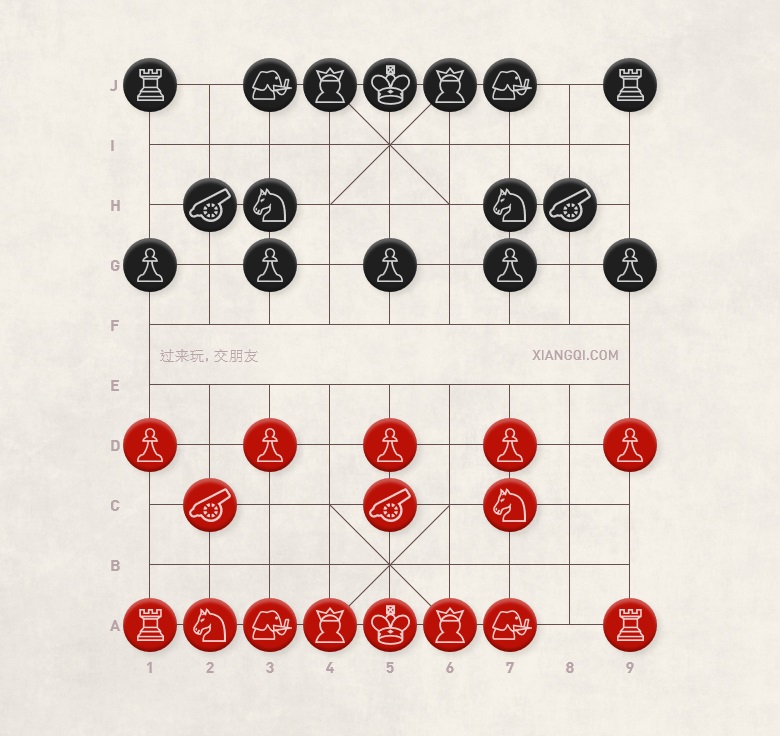 Red will start with C2=5 followed by H2+3. Black will usually play H8+7 and eventually develop the other Horse as H2+3. However, it is very common for Black to develop the Chariots, Pawns, Cannons, et cetera before developing the second Horse as a Proper Horse. The versatility of Black’s counter is what makes it such a powerful weapon.

Although the Sandwiched Horse Defense had already been seen in the ancient manuals, Grandmaster Hu Ronghua is accredited with making it a popular and viable counter against the Central Cannon.

The basic formation of the Sandwiched Horse Defense is the development of both Horses as Proper Horses AND developing one of the Cannons as a Palcorner Cannon. Because the Palcorner Cannon is placed between the Proper Horses, it has been called the Sandwiched Horse Defense as if it was sandwiched between the Horses. This name was initially given in a wordlist provided by the Asian Xiangqi Federation in the 1980s. 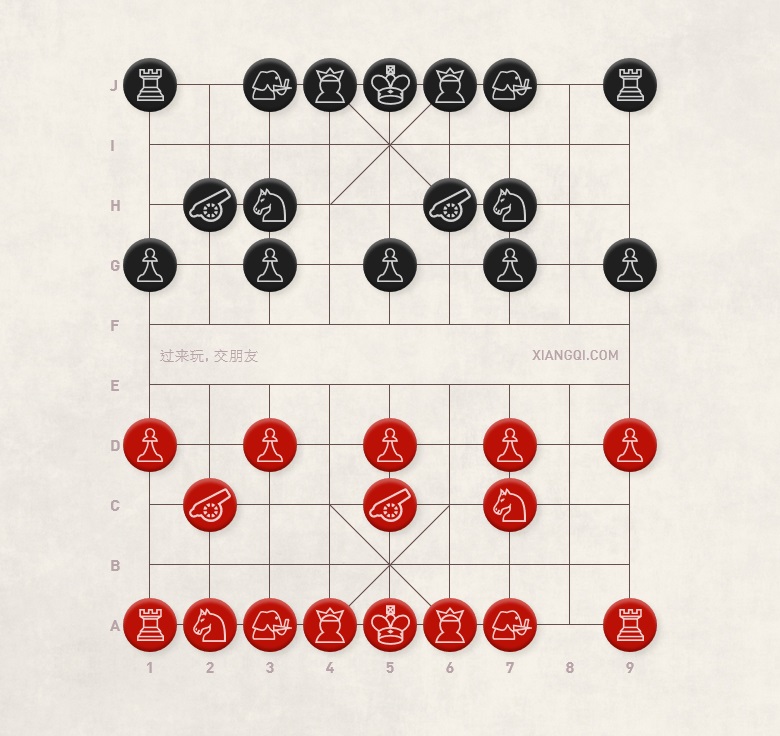 As its name implies, the Single Horse Defense has only one Horse that protects the Central Pawn. Thus, Black develops one Horse as a Proper Horse and the other as an Edge Horse.

As the Central Pawn has only one Horse protecting it, the central file is relatively weak in the Single Horse Defense. Although it is considered an orthodox opening, it is not commonly seen as a direct counter to the Central Cannon. Instead, a similar formation is frequently seen in the Pawn Opening with Central Cannon Variation vs. Thundering Defense with Left Elephant Variation.

The Single Horse Defense has been around for centuries, and the evolution of this opening system has suggested that Red will fare better by attacking with a Filed Chariot. It has also been proven that Black will be fare better if he develops his Chariot as a Ranked Chariot. 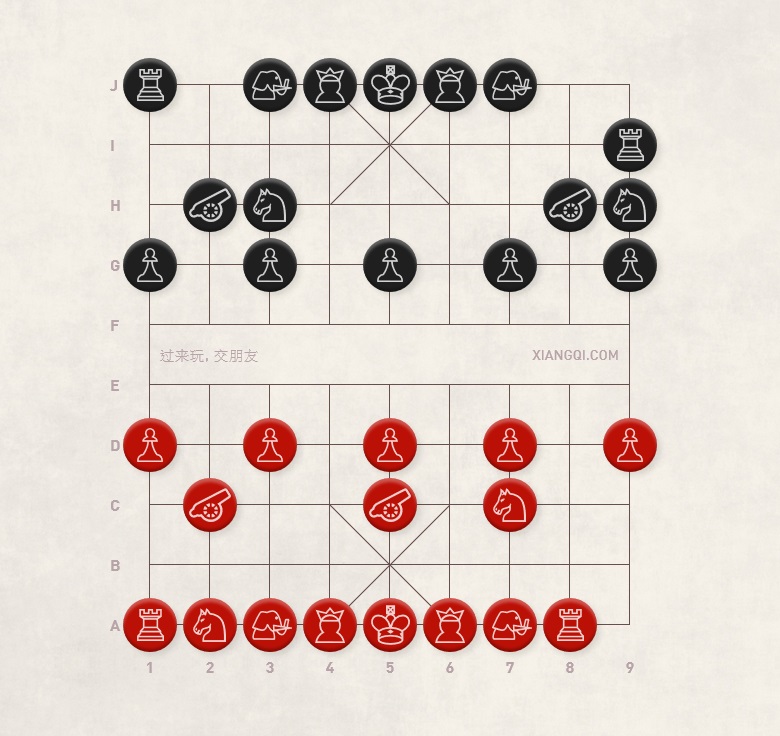 The Left 3 Step Tiger is sometimes seen in tournaments. Black starts to counter with H8+7, C8=9, followed by R9=8, where the pieces from one flank are developed. Black will usually continue with the Deferred Opposite Direction Cannons or formations similar to the Screen Horse Defense. 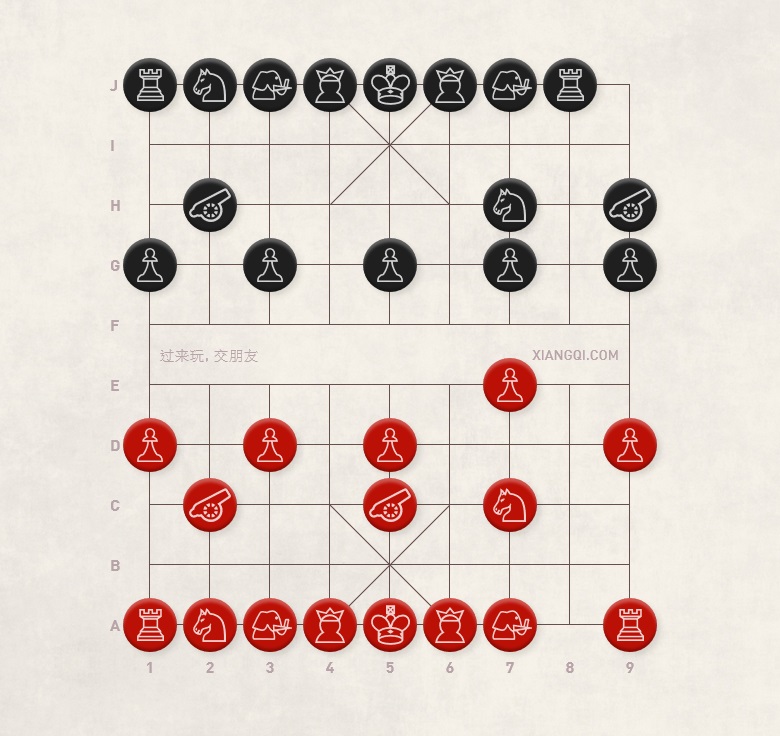 The Left Cannon Blockade starts with Black playing H8+7, R9=8, followed by C8+4 as the first three moves against Red’s Central Cannon. From there on, Black can choose to play the Deferred Opposite Direction Cannons or formations similar to the Screen Horse Defense.

Black starts his counter aggressively and applies pressure to Red’s right flank, but this is done at the expense of inadequate development of Black’s right flank. 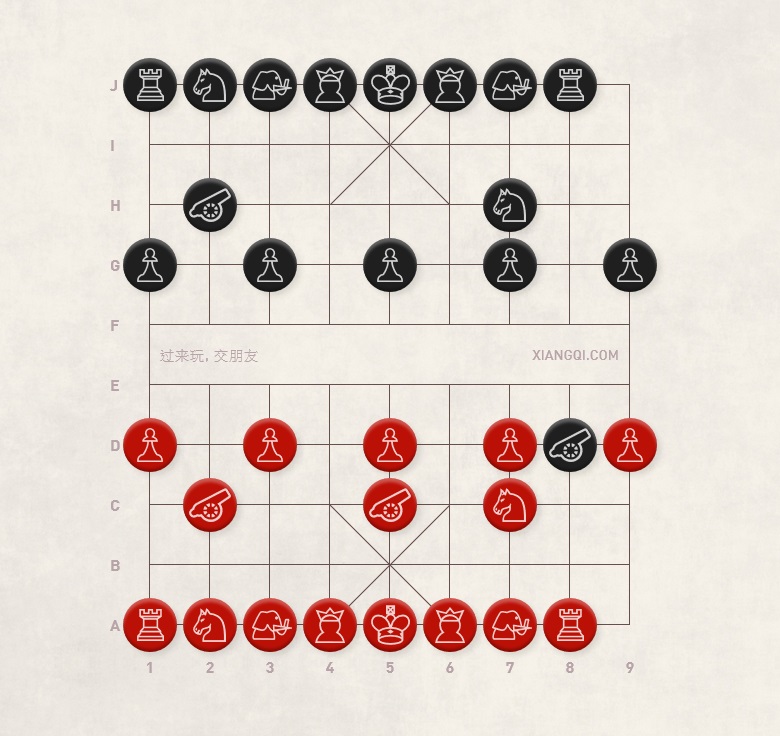 The defining characteristic of the Mandarin Duck Cannons is Black using the Chariot to protect the Cannon with R9+2, which is an awkward way of doing so. The other Cannon would have retreated to the throat rank where Black will start his counterattack very early in the game. 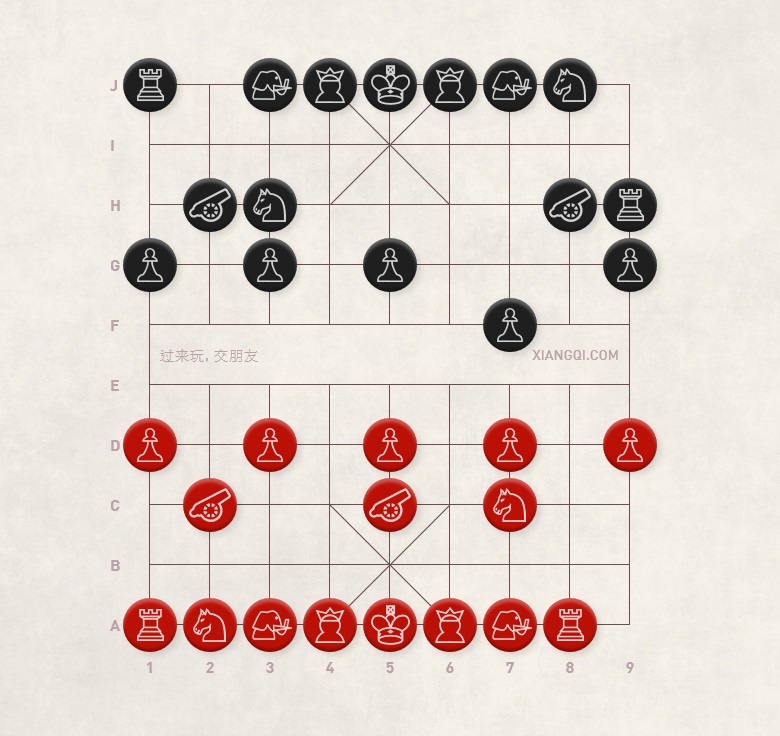 The Mandarin Duck Cannons demands a lot from Black as Black’s position can become very congested. If Black does not play his position very well, he can self-destruct very quickly. l

Central Cannon vs. Turtle Back Cannons

The Turtle Back Cannons was invented by the late Manchurian Xiangqi expert, Ba Jiren, who wrote about this counter in the Anti-Plum Flower Manual. 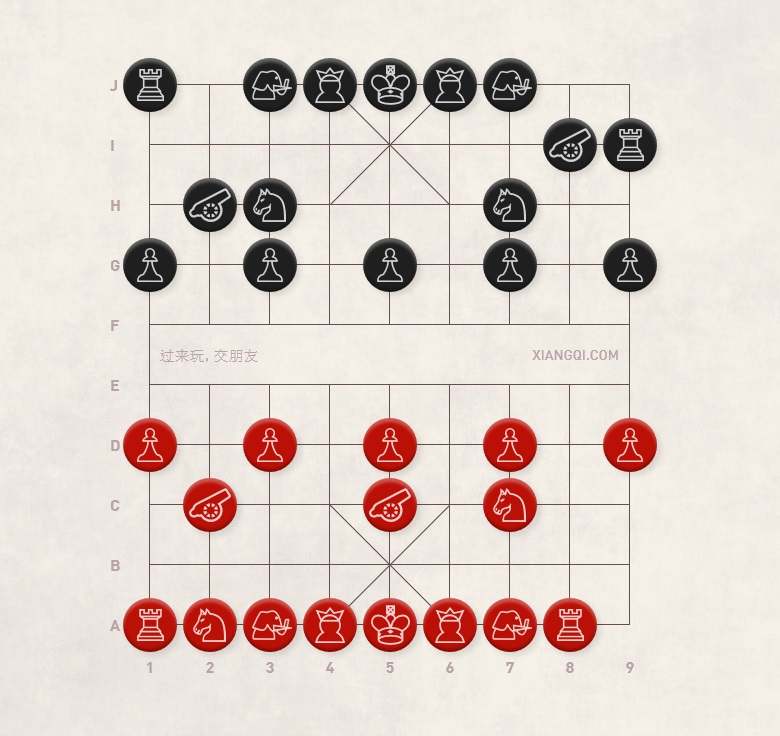 This position is reached after playing:

Red will often choose to attack by playing P3+1, P5+1, or P7+1. Black will then move the Cannon to the relevant attack to start countering immediately.

This unorthodox counter starts with playing C8+1 to protect the Central Pawn. C2=8 is the next move to prevent Red from developing his right Chariot as a Filed Chariot. It first appeared in the ancient manual Strategic Considerations.

Black aims to concentrate his forces on one flank very early for a quick counter. 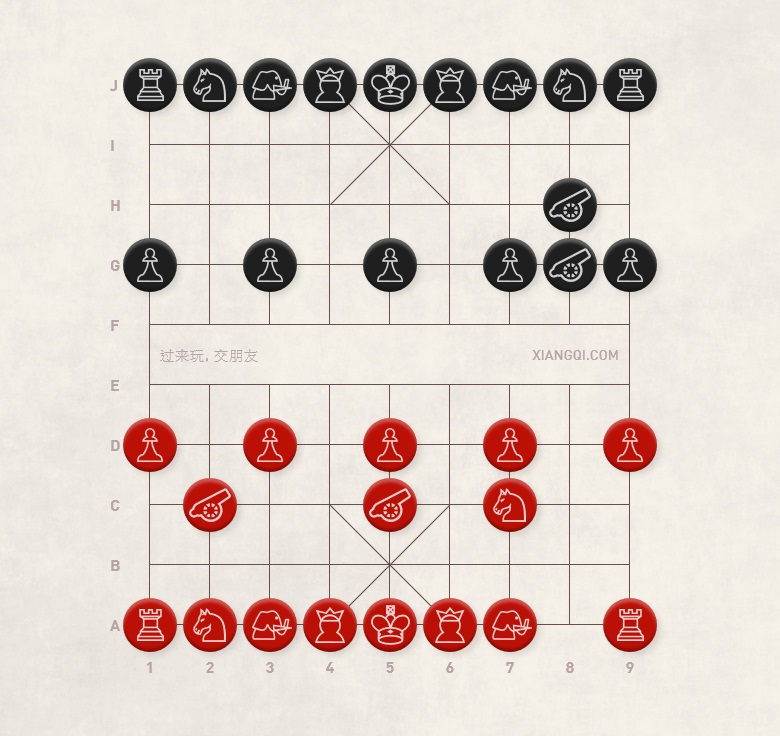 Red starts the game with P7+1 or P3+1, but P7+1 is mainly seen in competition. The author regrets that the current ECCO system defines the Pawn Opening as P3+1 and the ECCO classification, thus names the various opening variations in a manner that is opposite to the literature seen.

It is a very versatile opening which allows Red to adjust his opening formation as he wants. Red can continue with the Central Cannon, the Elephant Opening, or the Horse Opening.

Black usually counters with the Thundering Cannon or the Pawn Opening for the Pawn vs. Pawn Opening. Less commonly seen counters include moving an Elephant to the central file, developing one of the Horses, or even using the Golden Hooked Cannons.

The Pawn Opening has been quickly become very popular in competition nowadays and is the second most commonly seen Red opening. The main reason is its versatility and the ability to keep the opponent from guessing. Players with a strong midgame and endgame would often lead the game into less common lines or variations.

The following diagrams show some of the most commonly Pawn Opening and Counters. 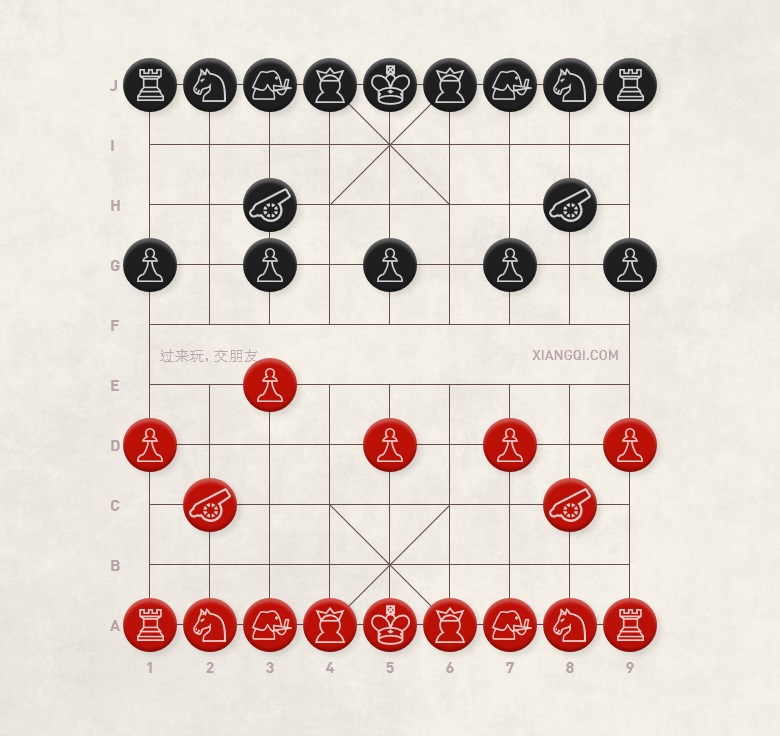 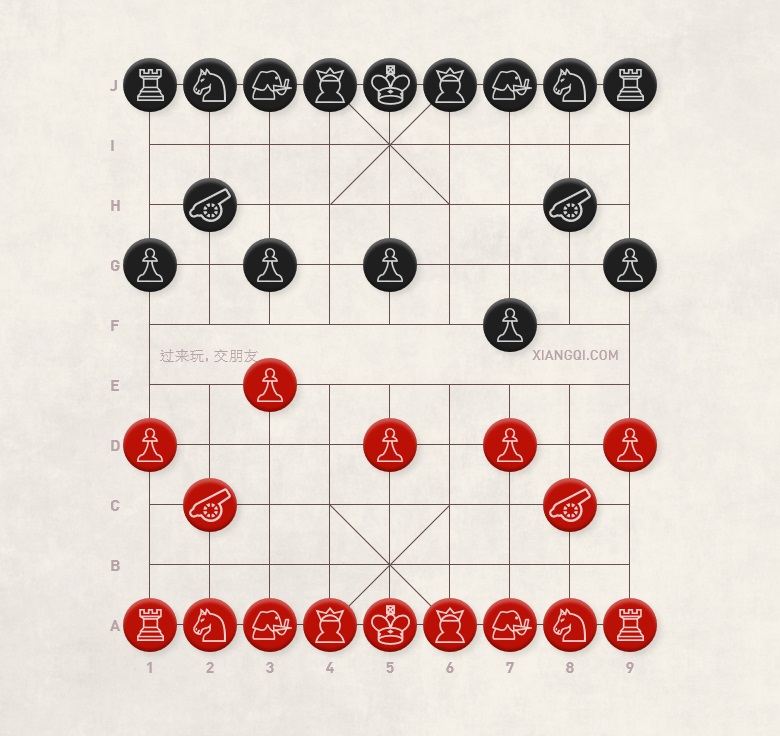 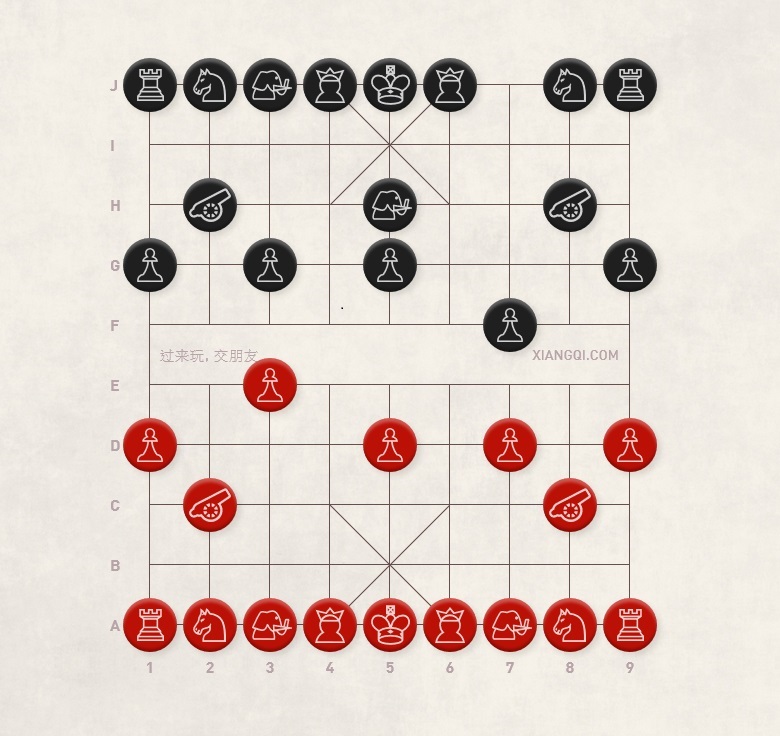 The Elephant Opening and the Horse Opening are similar to the Pawn Opening, whereby Red keeps his options open and only reveals his plan a few moves later.

By default, Red will play E3+5 for the Elephant Opening, and Black will counter with the Left Central Cannon, Cross Palace Cannon, Palcorner Cannon, Pawn Opening, et cetera. Often, the opening will be led away from the beaten path.

As for the Horse Opening, Red will play either H2+3 or H8+7 as his first move. Red can adopt various variations of the Central Cannon, Screen Horse Defense, Sandwiched Horse Defense or Single Horse Defense, et cetera. 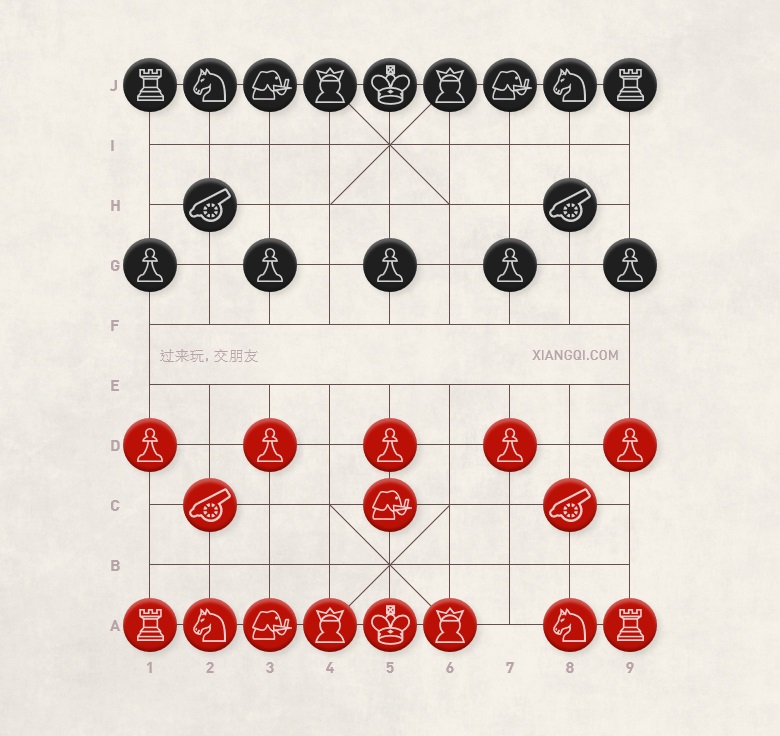 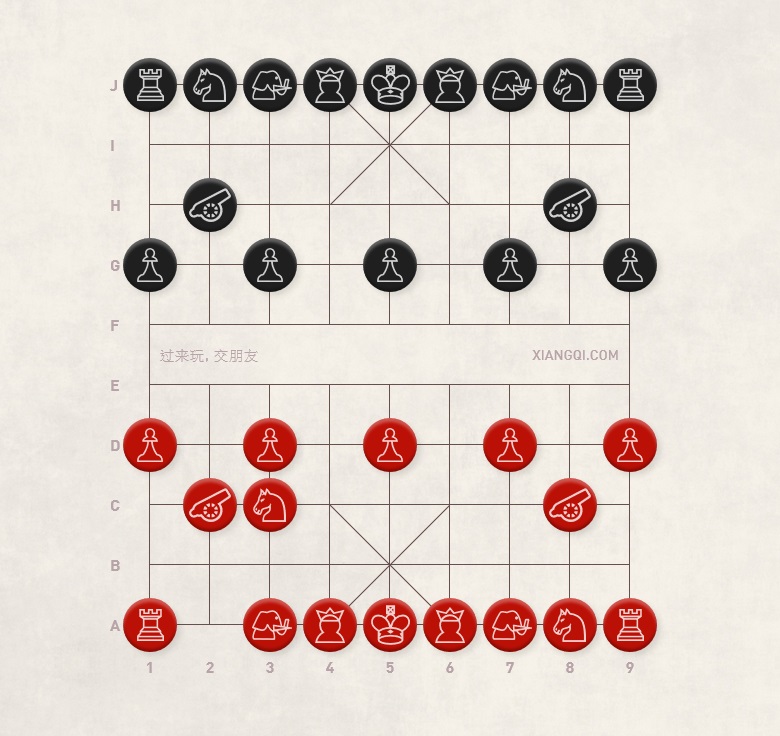 This short article is meant to introduce the basic opening systems in Xiangqi that are commonly seen. It is by no means exhaustive. Some opening systems have been studied so deeply that the opening line is defined only after the 10th or even 15th move.