The Opening Phase in Xiangqi (Chinese Chess) is one of the phases of Xiangqi where most newcomers are interested. However, to really understand the opening phase, a short introduction to the terminology is necessary.

When the author was writing the Lexicon of Xiangqi (Chinese Chess) in English, one of the sections that had the most content was the openings section. The following is a compilation of basic opening terms that are considered to be essential knowledge.

This article is divided into the following sections.

Development of the Cannon

Red plays C2=5 or C8=5 for the first move. It has been the opening of choice for the past few centuries. It accounts for approximately half of all the openings played. Even other openings like the Pawn and Horse Opening often transposition back to this opening system. 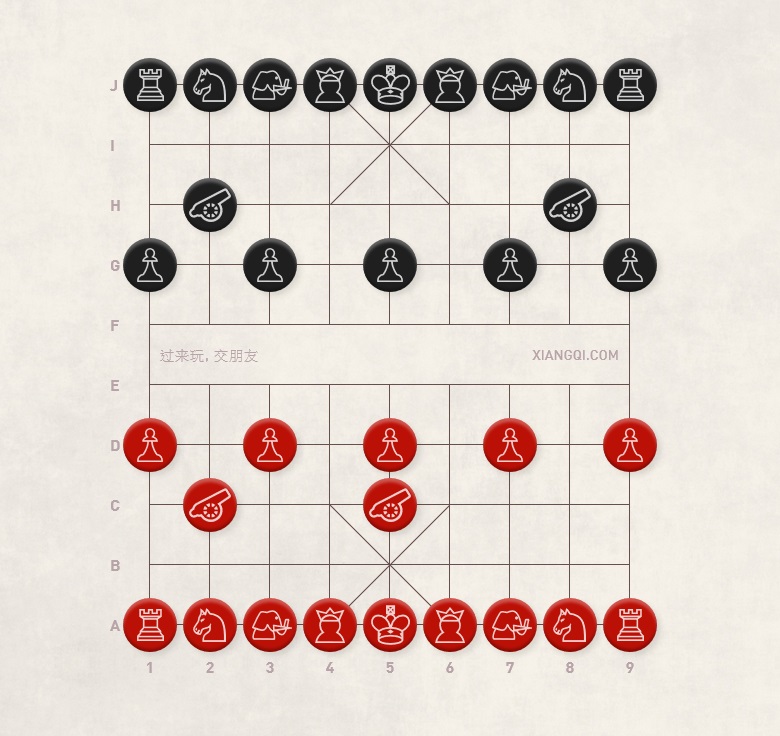 a) The integers represent the files on which the Cannons are located, and DO NOT REFER TO THE TOTAL NUMBER OF CANNONS! 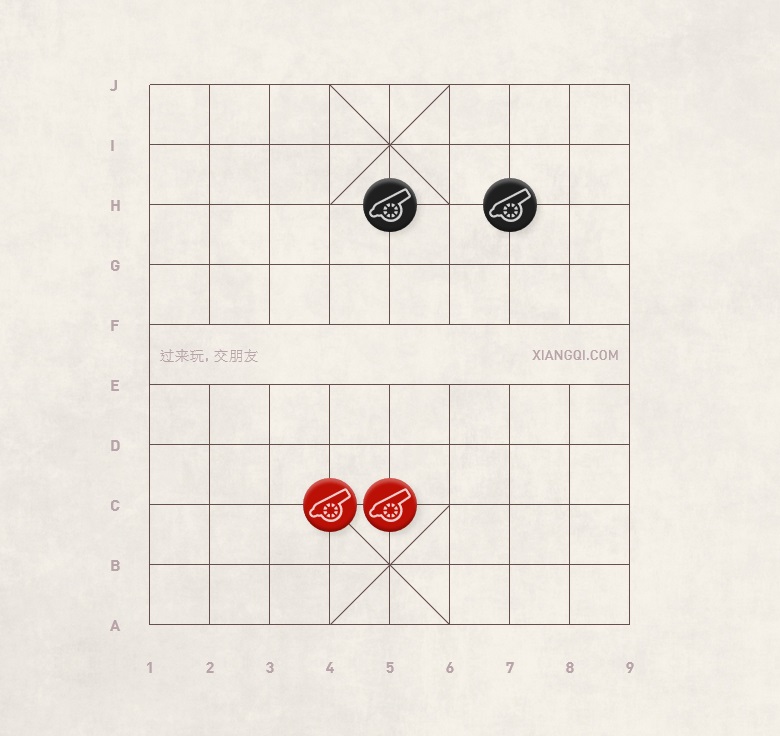 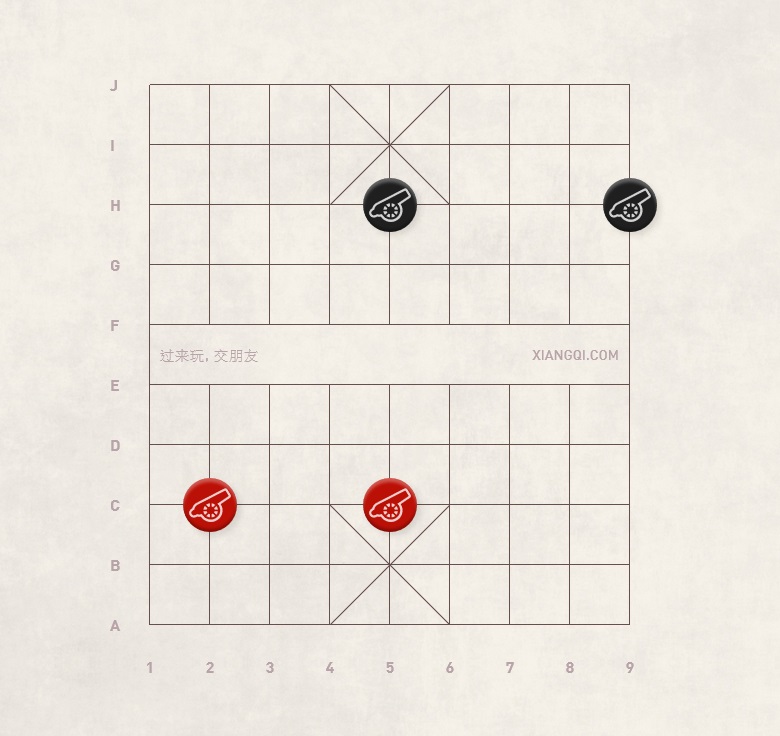 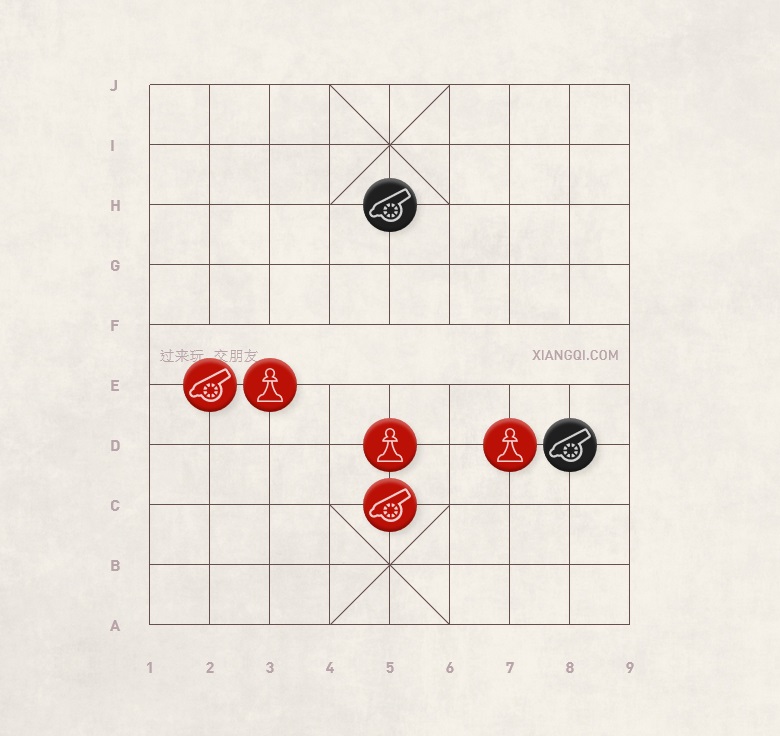 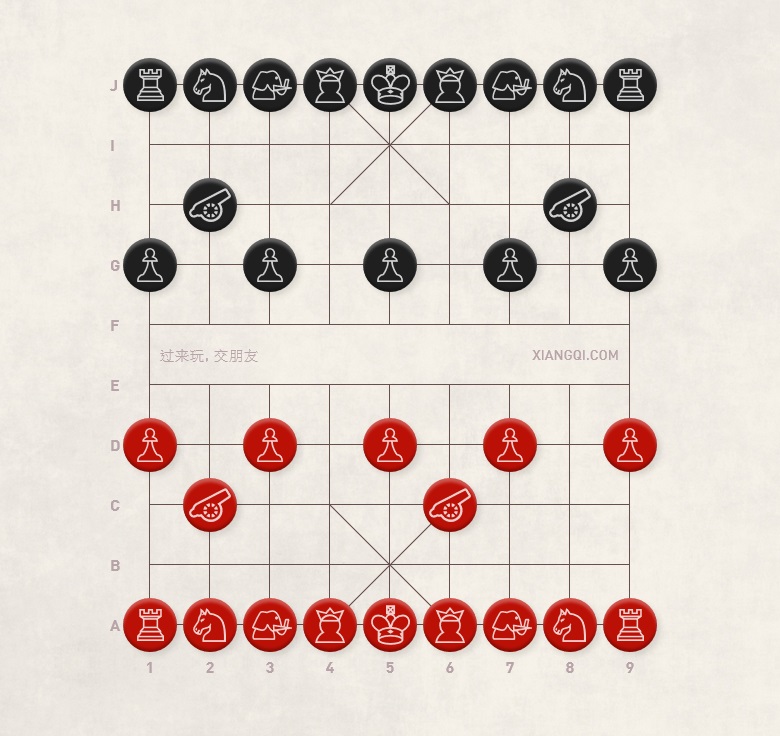 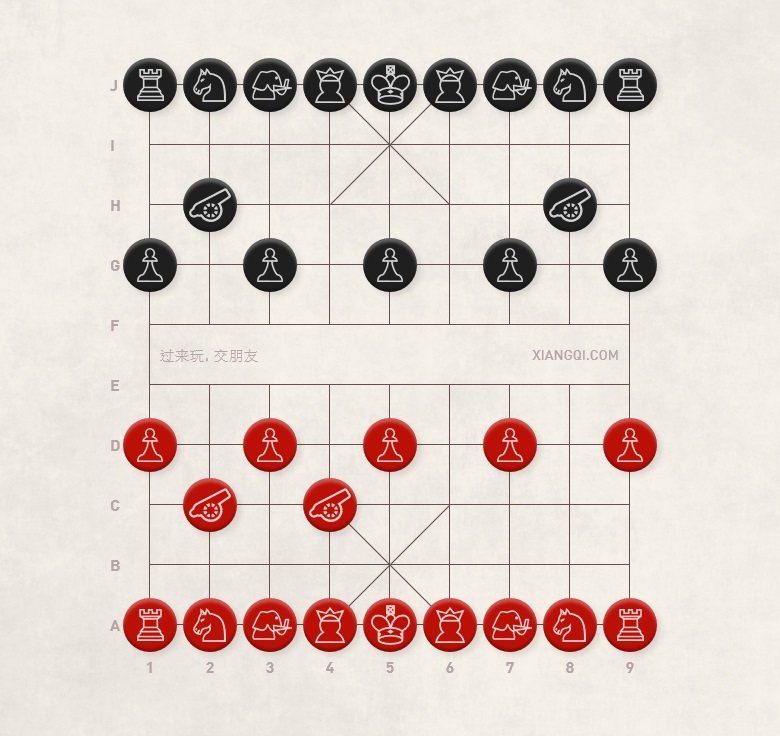 Development of the Horse

Many terms are used to describe the Horse at various positions. These terms differ from the terms used in the multiple attacks like the Elbow Horse Checkmate, et cetera. The terms listed below refer only to the names of the Horse in the opening.

For the Horse to be developed as an E-eye Horse, the adjacent Elephant as not be moved away. The E-eye Horse was the term given in a very early list of terms by the AXF (Asian Xiangqi Federation) as the Horse occupied the Elephant's Eye. 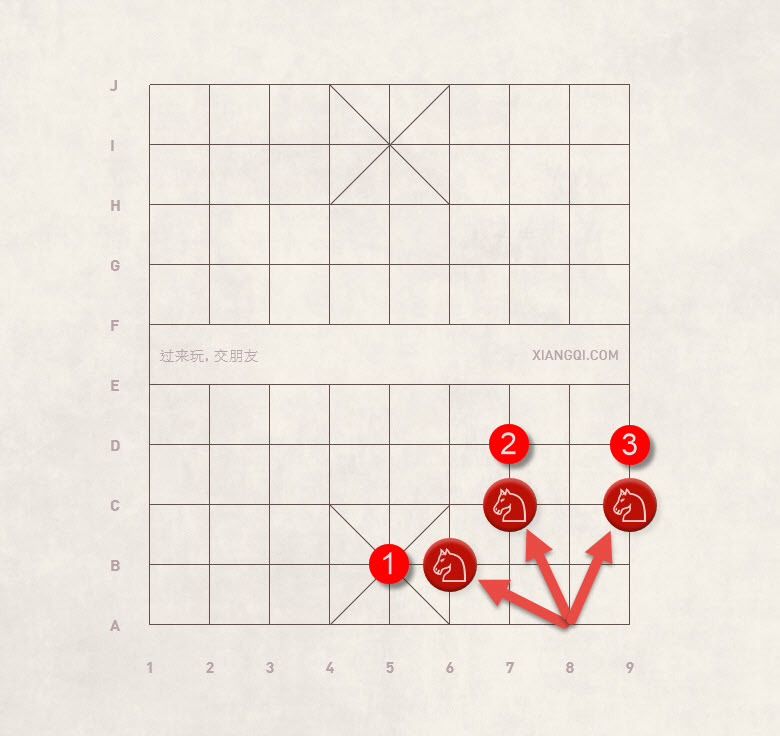 Sometimes, if the Horse is developed very quickly to the riverbank, say by the 3rd or 4th move, it is called a Trailblazer Horse (先锋马 xiān fēng mǎ) to stress the rapid development of the Horse. 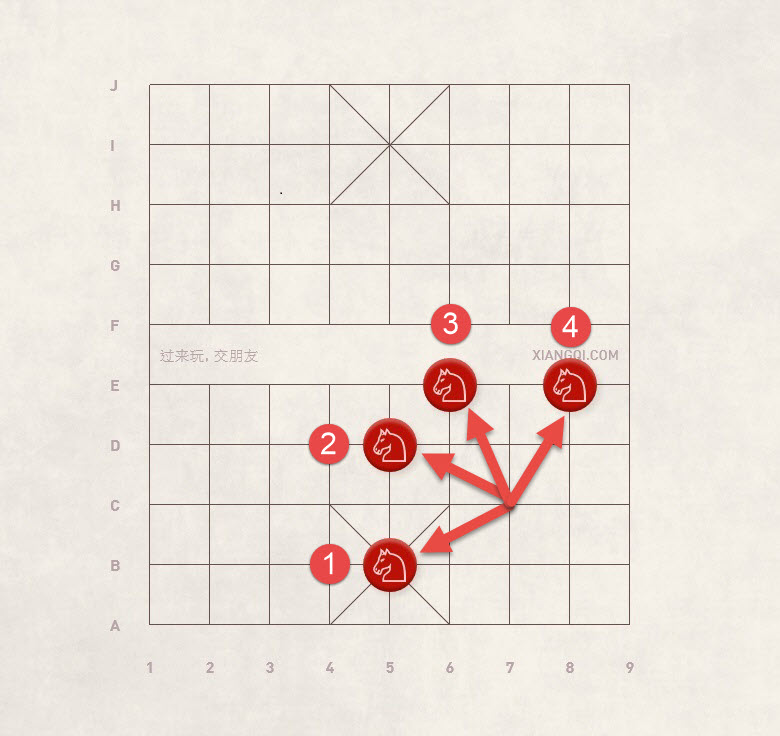 Diagram 8 Development of the Proper Horse

The Edge Horse is usually developed to the Riverbank to become the External Rib Horse. 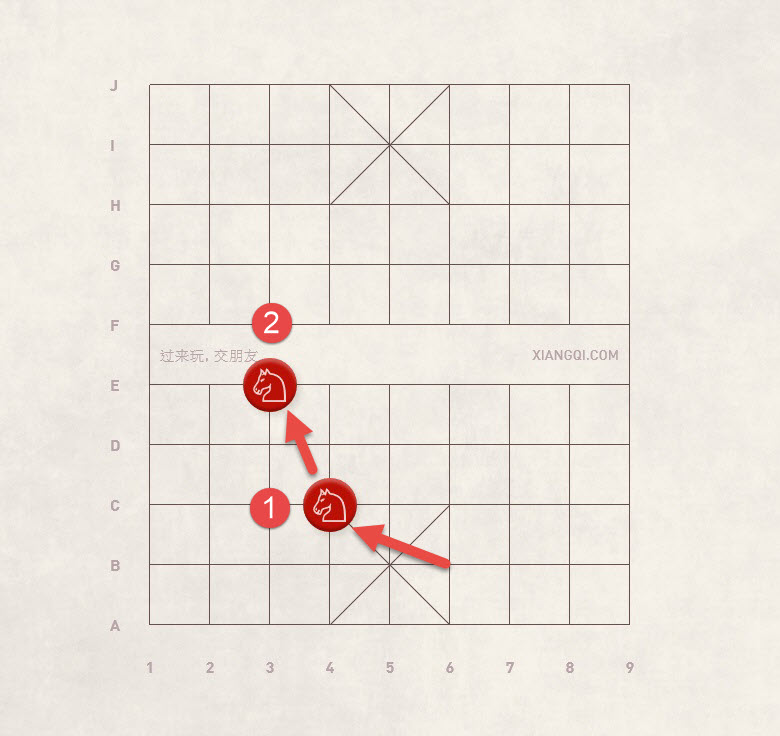 Development of the Chariot

Note: The Chinese pronunciation of the Chariot is jū, not chē. 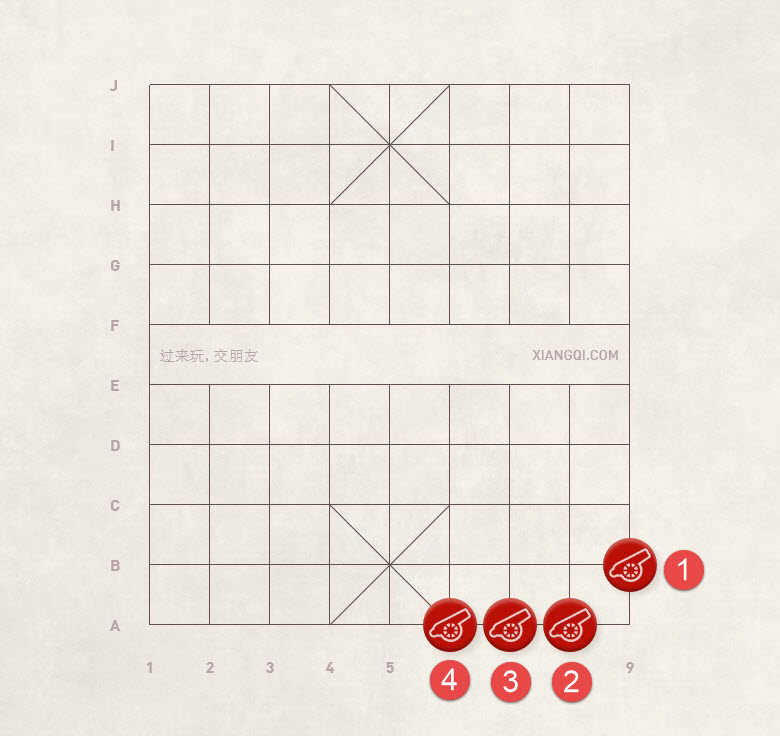 The Filed Chariot or Ranked Chariot is further developed as the game goes on. 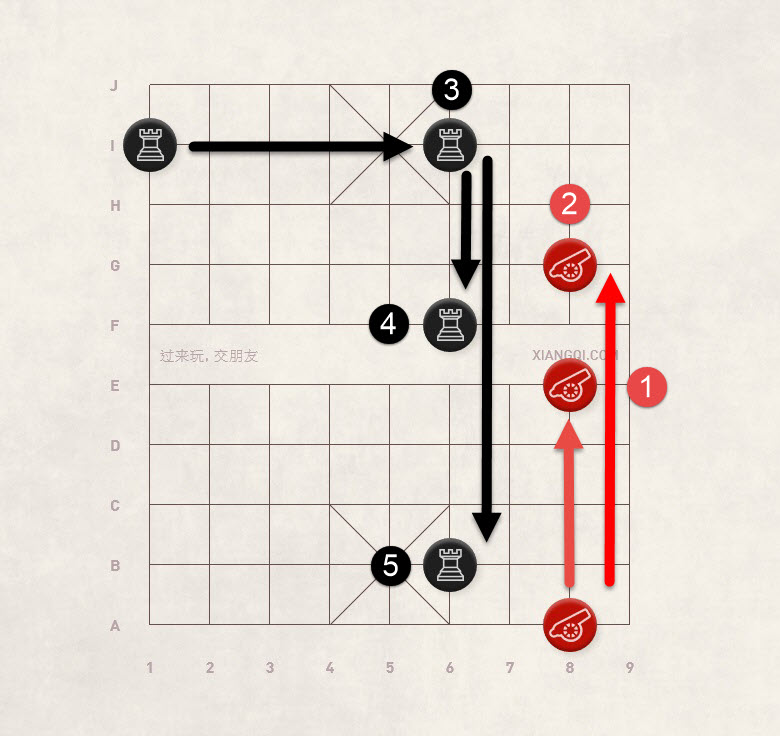 4 and 5 represent common intersections of development of the Ranked Chariot. There are no specific names to the author's knowledge.

There is an unorthodox opening whereby Red plays R1+1 for the Ranked Chariot as the first move, thereby offering the Horse as a sacrifice. This opening is called the Chariot Opening (铁滑车 tiě huá chē). For an even wilder version, both Chariots are developed as Ranked Chariots within the first two to three moves for the Double Ranked Chariots Opening. Such an opening is played as Red attempts a pseudo-sacrifice, hoping to claim back lost material very quickly in the game.

Development of the Pawn

The Pawn Opening (挺兵/进兵/仙人指路 tǐng bīng/jìn bīng/xiān rén zhǐ lù) is defined, by default as playing P3+1 or P7+1. It is considered an orthodox opening and has become very popular, being the second most commonly played opening in Xiangqi in tournaments. There is a poetic name to the opening called 仙人指路, which translated directly, would mean that a deity was pointing the way. This opening has been translated as Predicting Prophet in the past (HT Lau) and Angel's Pawn by other early writers.

Playing P5+1 as the first move is rarely seen. There is a name for it that the author has only seen in one article.

In the opening phase, the Pawns on the 3rd or 7th files are especially important because they allow for the development of the Horse in the same file. It has other implications too. For example, if Red gets to push P3+1, any Black Horse in the same file would have trouble being developed. Hence, in many opening systems and variations, the advanced Pawn is also included in the name to refer to a specific variation. For example, the Central Cannon with 3rd Pawn Advancement vs. Screen Horse Defense and the Central Cannon with 7th Pawn Advancement vs. Screen Horse Defense Opening systems are two major opening systems in Xiangqi.

If both the 3rd and 7th Pawns are advanced, it is called the Double Headed Snake Pawns (两头蛇 liǎng tóu shé). 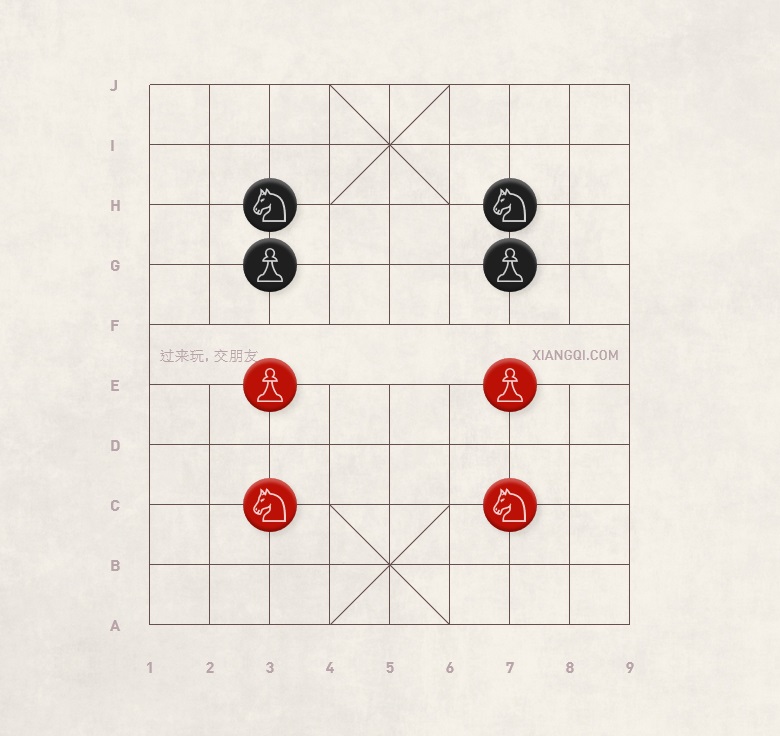 Development of the Elephant and Advisors

The development of the Elephant and Advisors plays a less significant role concerning the other major pieces in the opening phase. Usually, the piece that is moved is named in relation to the color. For example, the Screen Horse Defense with 3rd Pawn Advancement Variation and Left Elephant would mean Black had moved E7+5 instead of E3+5, which would have drastically different consequences.