A Detailed Introduction to the Notation System in Xiangqi (Chinese Chess)

A Detailed Introduction to the Notation System in Xiangqi (Chinese Chess)

The notation in Xiangqi (Chinese Chess) is a very fundamental part of Xiangqi with its own history and culture. In the past, the author has written a simple introduction and created a video that can be accessed at this link. In this article, a more in-depth look at the notation system will be presented. The article is divided into the following topics:

Why do we need a notation system?

Notation systems are required for communication in Xiangqi such that the moves that have been moved can be expressed clearly.

There are several different forms of Xiangqi (Chinese Chess) notation in the ancient manuals. It can be divided into three major categories.

The earliest extant notation system is found in Chen Yuanjing's (陈元靓, chén yuán jìng, ?-?) Shi Lin Guang Ji, which is supposed to have been published between 1228-1233AD. 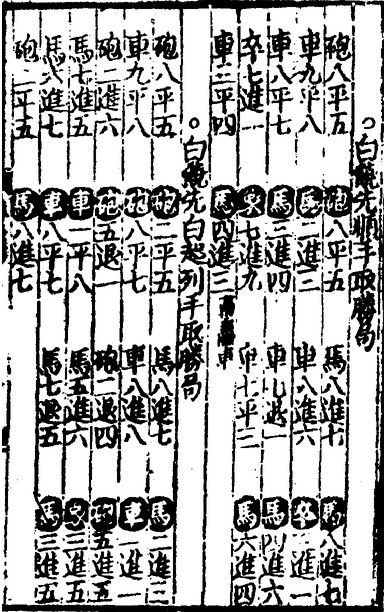 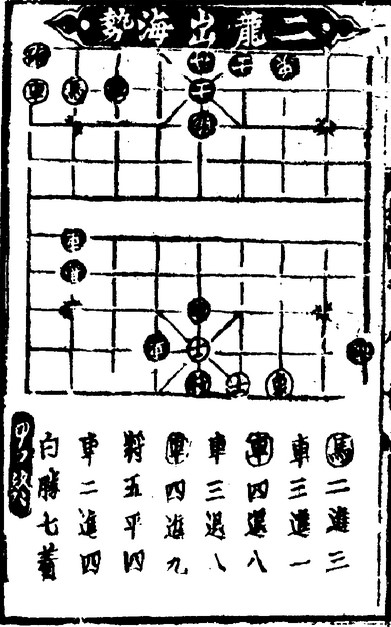 As can be seen, the notation system used in Shi Lin Guang Ji is the same as the one used today. It remains the most commonly used notation system in ancient and modern times. Another example is from Wan Bao Quan Shu (《万宝全书》 wàn bǎo quán shū), which was published in 1739AD. A page from the book showing both Xiangqi and Weiqi is shown below. 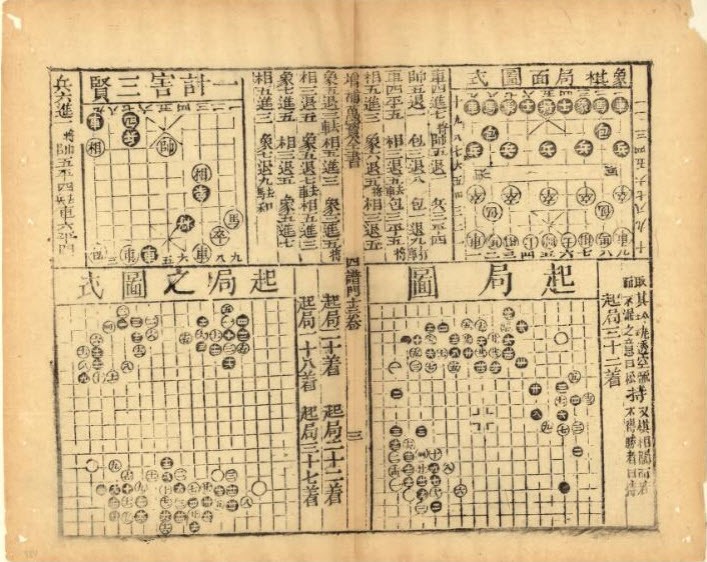 Diagram 3 Reprint of a page from Wan Bao Quan Shu depicting Xiangqi and Weiqi (3). The answers to the puzzle in the left-hand corner are given in the square at the top middle row.

In An Old Xiangqi Manual (《象棋老谱》 xiàng qí lǎo pǔ), the notation was slightly altered whereby the number of the files started from the left to right for both colors. Another interesting thing to note was that once a piece crossed the river, it would adopt the number of the files on that side. For more on ancient manuals, please refer to the three articles.

For example, if we were to use the nursery rhyme "Jack and Jill went up the hill to fetch a pail of water" as our poem, a move using this format would be represented as "Jack-Jill", "pail-hill", et cetera. The reader would have to constantly refer to the poem, which served as the guide to deciphering each move.

There were a few ancient manuals that used this system, but the most notable ancient manual would be Wang Zaiyue's (王再越 1662?-1722? wáng zài yuè) Plum Flower Manual (《梅花谱》 méi huā pǔ).

The author reconstructed the following diagram and published it in his Lexicon of Xiangqi (Chinese Chess) Terms in English. (4)

Diagram 4 Poem used by Wang Zaiyue as the legend to the moves. (4)

In One Hundred Variation Variations of Xiangqi (《百变象棋谱》 bǎi biàn xiàng qí pǔ, 1522?), a purely descriptive method of notation was used. For example, based on the puzzles given in the book, the answers would be something like this, Pawn captures Chariot, King retreats, Chariot advances for Check, Horse to Riverbank, et cetera

As mentioned earlier, the modern official standard notation system is given in the World Xiangqi Rules. The following notation system is explained with the presumption that the reader already knows how to move the pieces. If not, please refer to the introductory videos present on this site.

The names of the pieces are:

Movement of the pieces

The movement of the pieces are depicted with the following abbreviations:

The numbering of the files

It can be confusing for the westerner or newcomer to Xiangqi, but a little practice is all it takes to get accustomed.

Each move is recorded and represented by a four-component notation system. In summary, the four components are:

The notation system is best explained in terms of the movement of the pieces. Four pieces move in straight lines: the Chariot, Cannon, Pawn, and King. The remaining three pieces move diagonally (Horse, Advisor, and Elephant).

For linear pieces, the notation for advancing and retreating is to be introduced first. Please refer to the following example. 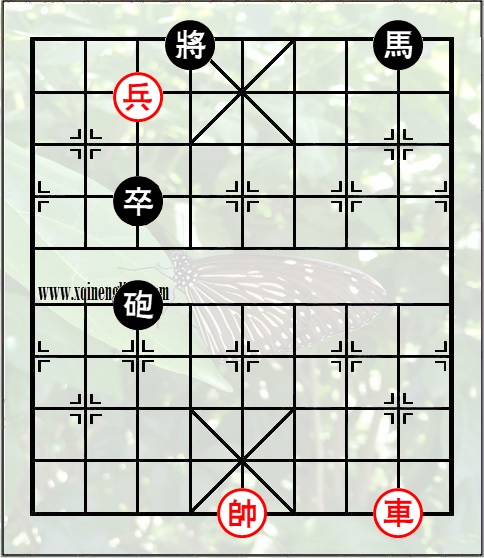 In this example, for Red to deliver checkmate, the Red Chariot will need to capture the Black Horse. The first two components for the notation of this move are: 'R' and '2', which will mean that the Chariot on the second file is to be moved.

The third component is '+', which will mean that the Red Chariot is to be advanced.

The fourth component will be the number of intersections to be advanced, which is '9'. 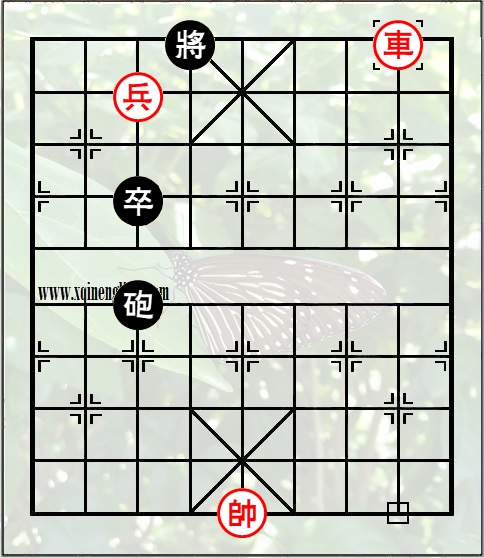 The notation for the Red Chariot capturing the Black Horse is 'R2+9'.

The same system works equally well for retreating a linear piece. For the Black Cannon to capture the Red Pawn, the notation is 'C3-4', which means that the Black Cannon on the 3rd file (Black's 3rd file) is retreated ('-') four intersections. 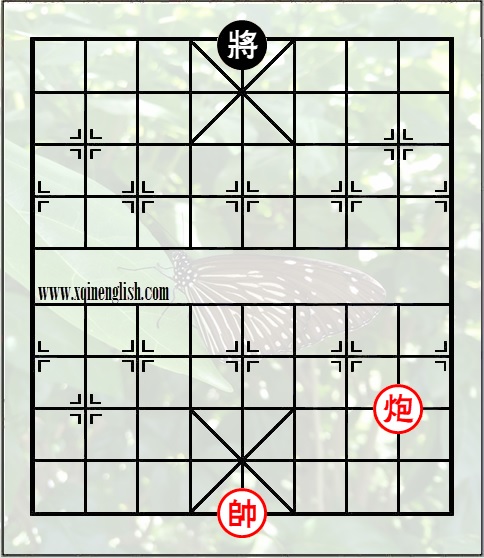 Diagram 8 Explaining C2=5. The Red Cannon on the 2nd file is the Cannon to be moved.

The third component of the move is '=', which means that the chess piece is traversed. Therefore, it will mean that the Red Cannon is to be moved horizontally. However, where should it move to as there are nine files?

The answer would be the '5' in 'C2=5', which refers to the 5th or central file. Hence, the Red Cannon will now be placed upon completion of the move, as seen in the diagram below. 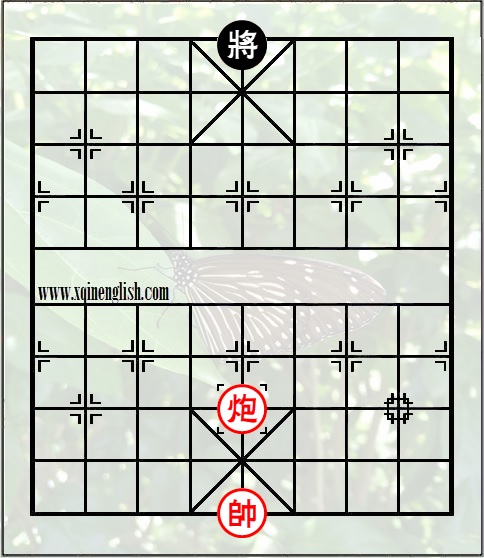 Diagram 9 Explaining C2=5. The Red Cannon on the 2nd file is moved to the Central File.

Explaining the notation system for pieces that move diagonally

The Advisor, Elephant, and Horse all move diagonally, which means they will end up on different files and ranks upon completion of a move. The four-component system is still used, but the numbers will only represent the piece's files and its destination file.

Continuing with the Central Cannon above, Black usually counters by moving a Horse to protect his central Pawn from capture by the Red Cannon. Let us assume that Black chooses to move his LEFT Horse. 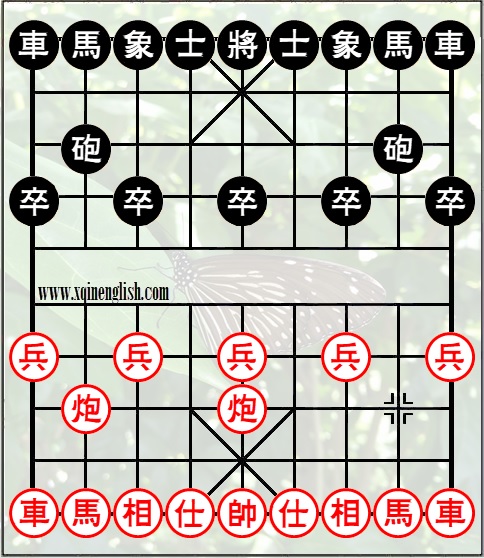 Diagram 10 Explaining the notation for the diagonal pieces 01

Therefore, the last two components of the required notation will be '+7', which means that the Black Horse is moved to Black's 7th file. The complete move is H8+7 to reach the position shown below. 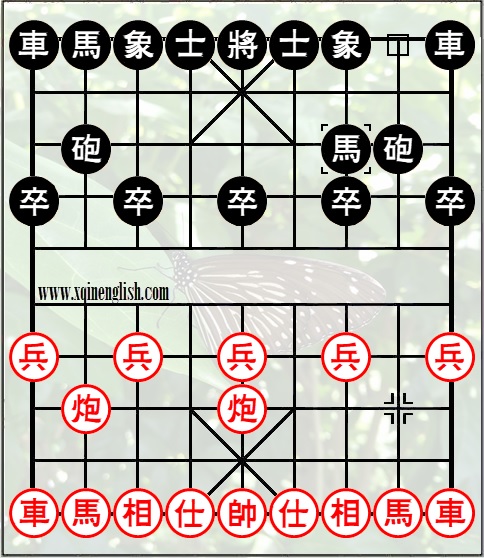 Diagram 11 Explaining the notation for the diagonal pieces 02

The system of notations given above is the basic standard. Two more scenarios must be explained.

Explaining the notation system for pieces in tandem

The above system will work if there are NO TANDEM PIECES (same piece of the same color in the same FILE) on the board. For example, if there were two Red Chariots in the same file, the second component of the notation system will fail to indicate which Chariot is to be moved.

Please refer to the example given below. 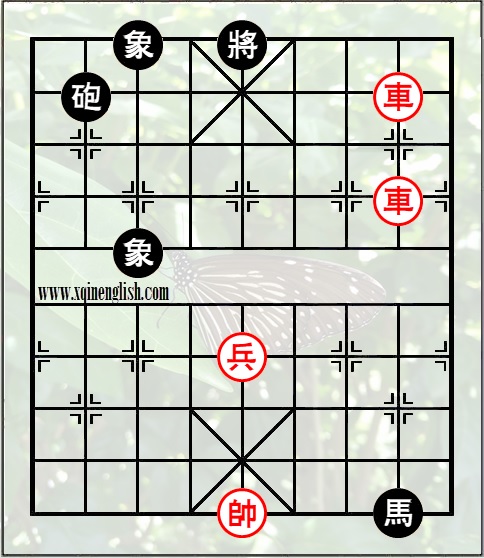 In this example, the Red Chariots are in the same file. If Red wanted to deliver a check, 'R2+1' will not indicate which Chariot is to be advanced as both Chariots are capable of such a move.

Explaining the notation system for Pawns in tandem

The Pawns are the only Xiangqi pieces to exceed two in number. The 2018 World Xiangqi Rules has clearly stated instead of using '+P' or '-P', the first component will refer to the relative position of the Pawn in tandem. The Pawn at the forefront is labeled '1'. The Pawn immediately behind it is labeled '2' and so on for a maximum of five Pawns. 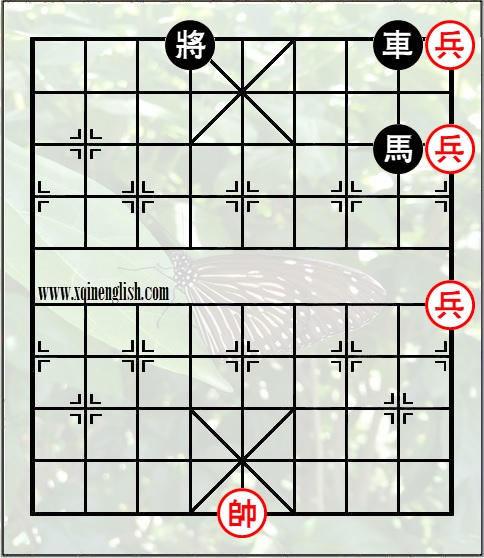 Diagram 13 Explaining the Notation for one set of Tandem Pawns

The same notation system will apply to sets of three, four, and five Pawns in tandem.

The last scenario whereby the notation mentioned above needs further clarification would be the case of having TWO TANDEM SETS OF PAWNS on the board. 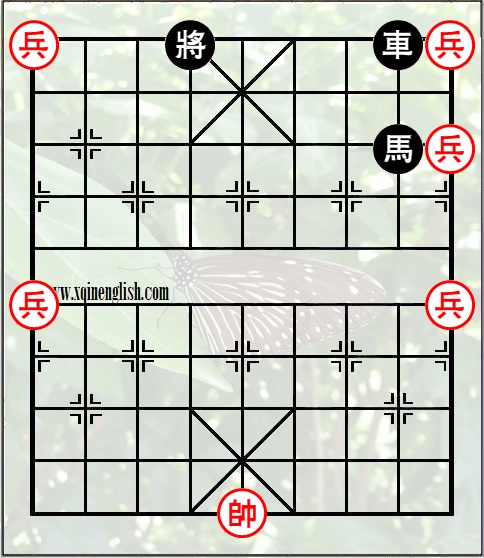 Diagram 14 Explaining the notation for two sets of Tandem Pawns

There are two sets of tandem Pawns in this example, which are rarely seen in actual play. The notation system mentioned above will still work.

The notation for the set of Pawns on Red's first file is the same as mentioned above.

For the Red Pawn at the left upper-hand corner of the board, the only legal move possible is '19=8'. For the left Pawn to cross the river, the notation is "29+1'.

To traverse a piece, the '=' is simply omitted in the shorthand system. For example, C2=5 will be written as C25 or 炮25.

To advance a piece, the '+' is omitted. Instead, the last integer is underlined. Using the example given above, H8+7 is written as 'H87 '.

To retreat a piece, the '-' is simple omitted. Instead, the last integer is overlined (aka, an overscore/overbar is added). Using the example given in Diagram 7, for the Black Cannon to capture the Pawn, the notation is 'C34' with an overline over '4'. This overline cannot be shown on webpages.

This form of notation is especially dear to the author as the periodical Beifang Qiyi used this notation. 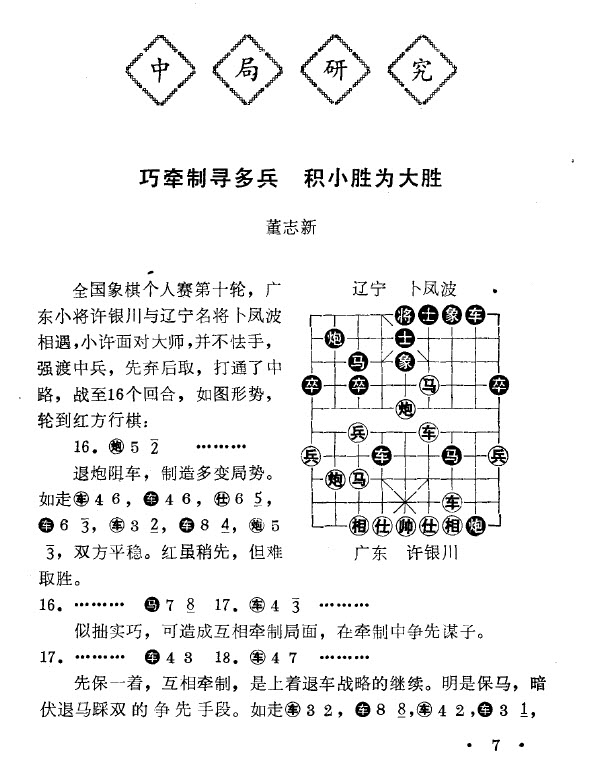 Some criticisms of the current notation system

Xiangqi historian Professor Zhang Ru-an held a similar point of view as he said that the original position to be discussed was essential when using the current notation system. Without the initial position, the moves cannot be deciphered as it would be impossible to identify which piece was to be moved. There was also an element of continuity that had to be memorized after a piece was moved. In one of the earlier versions of Shi Lin Guang Ji, the files were the same for both colors. The diagrams shown in this article are from a later version which is the only version that the author could find.  (6 pp. 162-163)

Simply put, the standard notation system is too dependent on the original diagram. If a certain position had to be discussed, the reader must read and keep the diagram of the position in mind and keep referring to the diagram.

There have been criticisms of the standard notation system. Most notably, Meng Baolin (孟宝林 mèng Bǎo lín) wrote an entire book that advocated a system he supported using coordinates. According to the literature cited in his book, several people advocated a coordinate system for the notation in China in the last century. 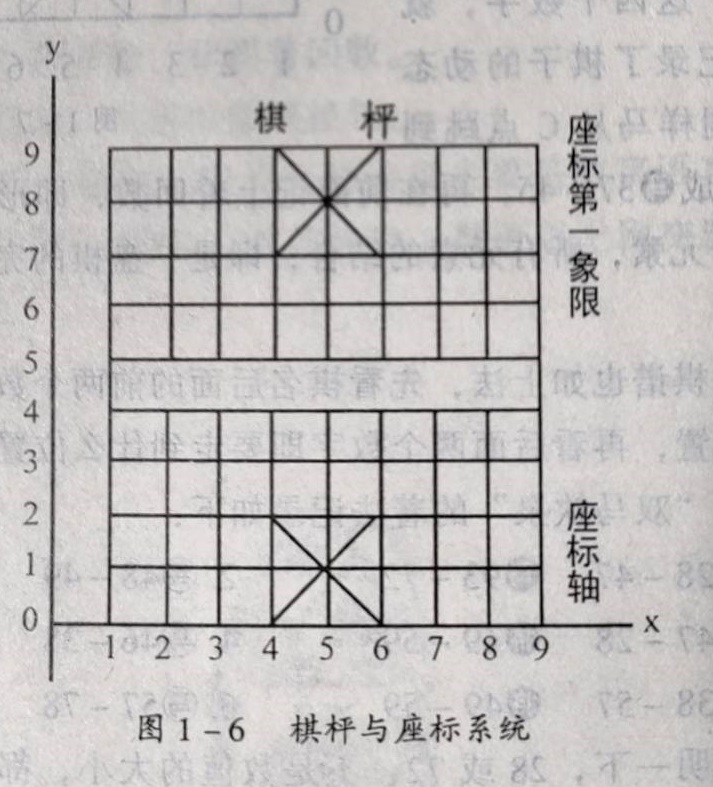 According to Meng, the advantages of using a coordinate system include (7 页 12-13):

Regarding the advantages that Meng pointed out, the author feels that allowing the exclusion of the original diagram may be possible for matches. However, for puzzles or a particular position, the diagram must still be included.

The last advantage is also interesting because it may allow computer programs to identify and pass judgment in repetitive situations as long as the algorithm can be written. However, to the author's knowledge, the current Rule of Xiangqi is so complicated that such an algorithm is almost impossible to write. Nevertheless, an advantage of using a coordinate system MAY solve such issues in the future.

Some advantages of the current system

The current notation system is not without its merits. Anything that has been around for almost a thousand years is bound to have its merits.

For example, the current notation system 'forces' the reader to memorize the position of the pieces subconsciously and thus allow for easier recognition of patterns.

It is a very efficient format of representing a move with only four components. In Meng Baolin's book, a move was given like H28-47, P48-49, et cetera, which is longer. One might argue that the chess piece to be moved can be removed from the equation, but it will be confusing and more liable to mistakes.

The notation system in Xiangqi is a very fundamental part of Xiangqi that has gone through very long periods of evolution. Currently, ALL the modern-day books, periodicals, videos, media, et cetera use it.

There are well over one million Xiangqi scores and match records on some of the websites in China (e.g., www.dpxq.com), and they all use the current system. It has also been implemented into the various Xiangqi engines, apps, and programs out there.