This article is the second instalment on Xiangqi (Chinese Chess) in the ancient book.

The contents of the article include the following:

In this article, the author will give a simple explanation of the meaning behind the titles. For a more detailed analysis of the boards and possible variations, please refer to the author's book and published on Amazon. It is called One Hundred Variations in Xiangqi & Marvelous Variations Xiangqi Manual.

Because the notation did not conform to modern-day recommendations by the World Xiangqi Federation, the author has rearranged and presented the solutions using modern-day notation. 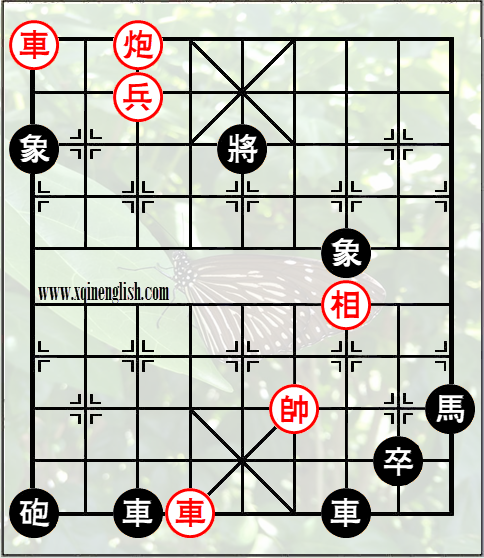 The author has translated the title as "Two Warriors entering Taoyuan." He cannot find where the endgame composition originated from. 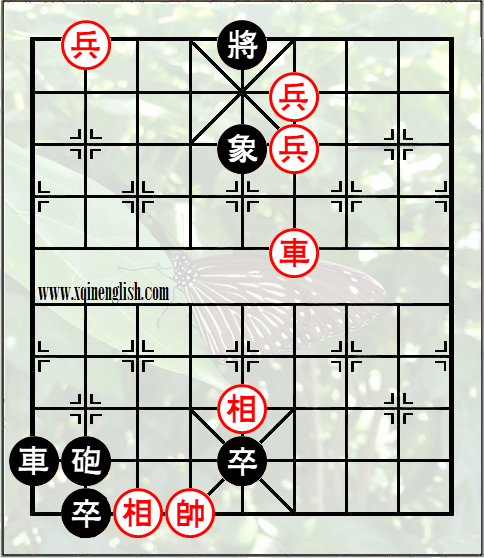 The author has translated the title as The Three Sworn Brothers Battle Lü Bu. The first two Chinese characters would mean that three heroes did battle against another person. The last two Chinese characters would be the name of a mighty general in the history of China who was immortalized in Romance of the Three Kingdoms. Lv Bu was so powerful that he could take on the three sworn brothers of Liu Bei, Guan Yu, and Zhang Fei in the novel, and this incident was later immortalized in the novel.

The same title has also been used for other endgame compositions.

This endgame composition was also found in the Marvelous manual as Board 44. It was also collected in the ancient manual Strategic Considerations as Board 25.

The author has translated the title as "The Four Horses join Tang." This endgame composition was collected in the ancient manual Remains of the Heart of the Warrior (《心武残篇》 xīn wǔ cán piān).

Note: The first few moves given for this puzzle were flawed, and there were several errors in the scribing. The author has chosen to use the modern-day corrected version as the solution. 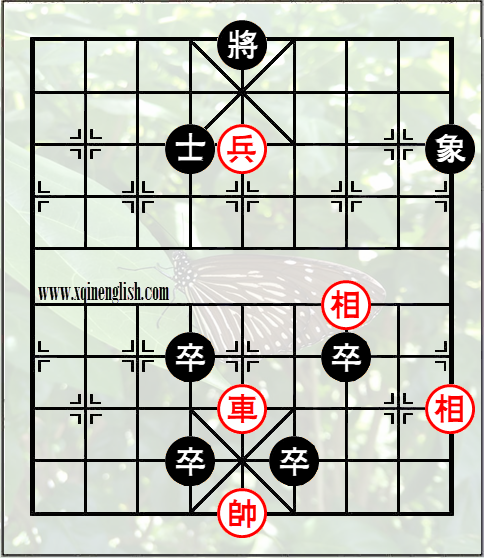 The author has translated the title as "Five Tigers Entering Sichuan." It would be Board 39 in One Hundred Variations of Xiangqi.

This endgame situation was flawed in that it suggested that it was a draw. 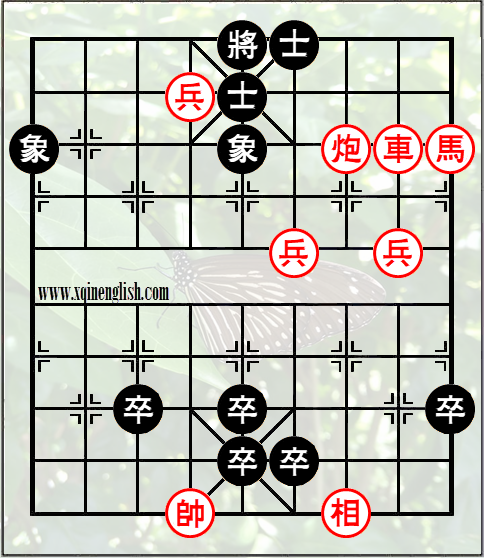 Note: The notation for Black's last move was blurred, and the author cannot be sure if it was the character for advance or retreat. However, E9-7 would seem to be the logical guess. Unfortunately, the comments suggested that this was a draw, where in fact, it would be a book win situation for Red.

The author has translated this endgame composition as Six Generations Traveling to Jiangnan. It would be Board 32 in One Hundred Variations of Xiangqi.

Note: Perhaps it was because the puzzle was now placed before the solution to save space for arrangement. 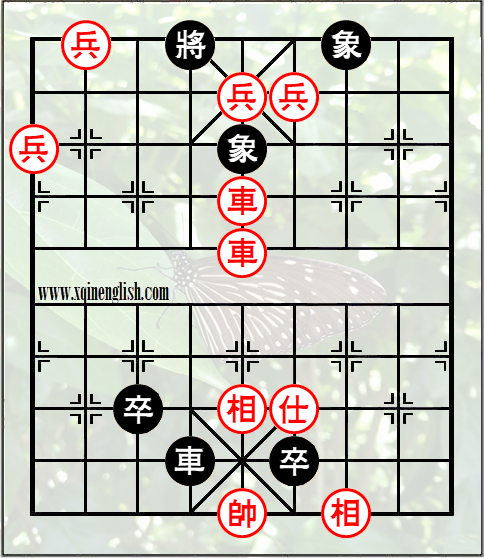 The author has translated the title as "The Seven Sages Pass the Test." This endgame composition was found as Board 10 in One Hundred Variations of Xiangqi and is more challenging.

The solution given in Wan Bao Quan Shu was severely flawed. One or two moves were omitted in the solution, perhaps due to an error in scribing. The author has listed the mistakes in this puzzle. 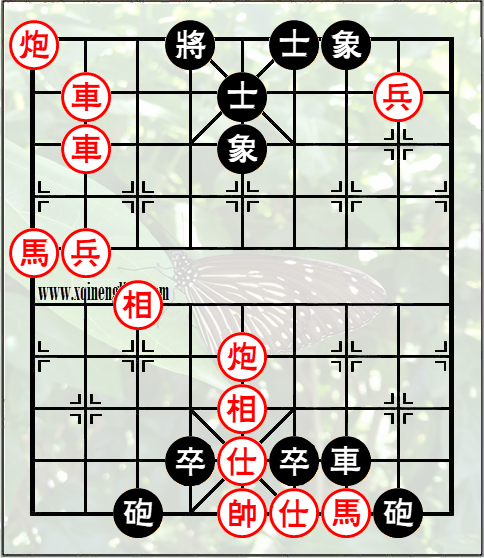 This move was not recorded.

This move was not recorded either.

There was a transcription error. The recorded move was the Cannon was used to capture the Black Pawn. It should be the Chariot.

There was a blunder in notation. It should have been R3+8 (using the notation in Wan Bao Quan Shu), but R2+8 was given.

This was another major mistake in the book. It is illegal to make this move as Black would be placing his King in check.

As can be seen, this puzzle was highly flawed.

The author has translated the title as Ambush from Eight Directions. This puzzle was collected as Board 31 in One Hundred Variations of Xiangqi. 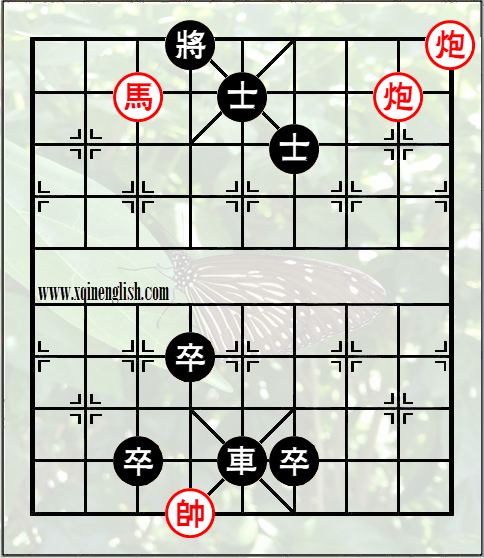 However, there was an extra move that was given in the book. It described a Horse on the Central File advancing to deliver a check which is impossible.

The rest of the moves given in modern-day studies of the endgame position are shown below.

The author has translated the title as the Nine Sons Passing the Imperial Exam. This puzzle would be Board 32 in One Hundred Variations of Xiangqi.

The position of the puzzle was flipped on this board. It should be Black who started first, and the moves would make sense. The author has taken the liberty to make the relevant modifications to conform to modern-day standards. 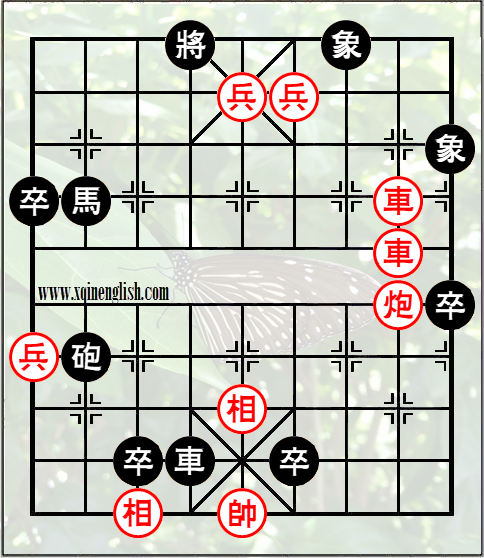 十三太保 would refer to Tang Dynasty's General Li Keyong (李克用 lǐ kè yòng) the thirteen foster sons (including his son). It is a piece of colorful history. The creator or person who corrected the original puzzle in One Hundred Variations in Xiangqi probably decided to use the name because there were thirteen pieces on the board.

The author has changed the solution to conform to modern-day standards.

The author has translated the title of the endgame composition as "Do not Attack." This endgame composition was similar to Board 40 in One Hundred Variations of Xiangqi, where a Black Elephant could be found on Black's bottom rank. The original puzzle was flawed, and Mao Huanwen (?) did away with the Elephant and corrected the solution. 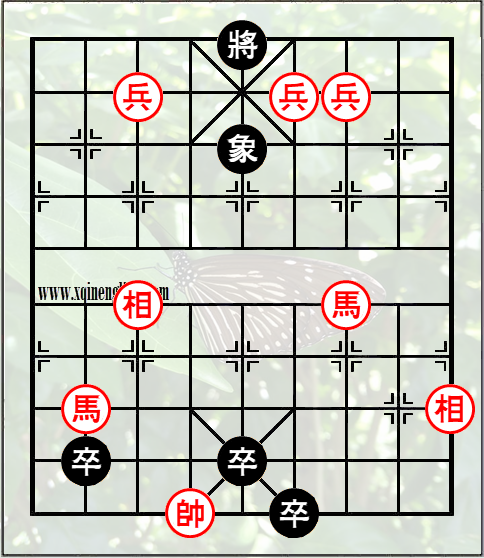 In Wan Bao Quan Shu, a similar format to Xiangqi was also used to introduce Weiqi. There were some theories and some records of games. See Error! Reference source not found.. While the top half of the book was devoted to Xiangqi, the bottom half was dedicated to Weiqi.

The Weiqi boards were given in parallel to the Xiangqi endgame compositions, as shown in Diagram 12.

It seemed that Prasaka was very popular in China centuries ago but gradually fell out of favor by the Ming Dynasty and was 'replaced' by Xiangqi. It is known by many names like Prasaka, Bo Luo Sai Xi (波罗塞戏 Bō luó sài xì), Prasena, et cetera in Sanskrit.

The game was implicated as Xiangqi or perhaps a precursor to Xiangqi by early Western scholars as indirect proof that Xiangqi was of Indian origin. In particular, HJR Murray had the following passage:

"And by this route other Indian games reached China, of which tables or backgammon is one of the most interesting, because it long retained a name revealing its Indian origin. This name, t'shu-pu, is a Chinese transliteration of the Indian chaupur (= Skr. Chatush-padam). Chinese works mention its introduction as having taken place as early as A.D 220-265, and the game had reached Japan before the end of the seventh century. (Footnote 6)." (2 p. 120)

"The Chinese references to this game were collected by Himly. The Hun Tsun Su (of the Sung period, 960-1279) says that t'shu-p'u was invented in Western India, and spread to China in the time of the Wei dynasty (A.D 220-265), where it attained its greatest vogue between 479 and 1000. It adds the information that the game had four other names in succession, wu-sho (spear-seizing), thshan-han (long row), po-lo-sai-hi, and shwan-liu (double sixes), its present name. The Ki Tsuan Yüan Hai says that the shwan-liu came from India and is called po-luo-sai in the Nie Pan Kin (i.e the Nirvana-Sutra), translated by Yüe-Chi or Indo-Scythian monk, Chi Chang, in the latter half of the second century A.D. the Po-Wuh-Che (a later construction of the of a lost work of the third century) says that Lao Tzu (end of 6th c. B.C) invented t'shu-pu when he went to Central Asia. This would associate it with the introduction of Buddhism …" (2 p. 120)

Extra information has to be mentioned about 雙陸, which is the traditional Chinese for 双六 (Simplified Chinese). One of the formal ways of writing the number 6 is to use '陸,' which is pronounced as lù. It is still used in writing checks at the bank, et cetera. However, the Simplified Chinese character for the number six, '六, 'is pronounced as liù. Murray was right about translating 双六 as 'double sixes.'

The author has seen the game being referred to as Shuang Liu, and both Shuang Lu and Shuang Liu are acceptable based on how they are pronounced.

Murray was correct in the names of Shuang Lu. Unfortunately, he somehow mixed up Shuang Lu with T'shu-p'u (摴蒲), which can be pronounced either Chu Pu or Shu Pu, which is another game of Indian origin. For the sake of discussion, the author will use Chu Pu.

The origins of Chu Pu are mixed. Some have attributed the Taoist Sage Lao Zi (Lao Tzu in Murray's writing) to be the inventor, while there are other accounts of the game being of Indian origin. There are still plenty of extant texts in Chinese literature that prove that they are different games.

Murray suggested an Indian origin of Xiangqi, citing the indirect evidence of Prasaka and Chu Pu. This was given in his writing mentioned above and repeated here:

"And by this route other Indian games reached China, of which tables or backgammon is one of the most interesting."

The author has much respect for Murray and his work. However, if Murray had already mistaken the two games in his analysis, then any 'conclusion' derived is highly debatable and not convincing.

The author often wonders if Murray might have reconsidered his ideas if he had more accurate information about the ancient Chinese games.

Different diagrams in Wan Bao Quan Shu prove Xiangqi and Shuang Lu are different games and do not appear to be related. Perhaps the most glaring difference is that the pieces in Shuang Lu are undifferentiated!

Diagram 15 Googling 雙陸 produced the following screenshot. In particular, Backgammon and (雙陸) were associated together in the recommended article on Wikipedia. See Red box.

An in-depth discussion of Prasaka, Chu Pu, and Xiangqi is beyond the scope of this text. And the author regretfully says that there was no introduction of Chu Pu in Wan Bao Quan Shu.

Introduction to Other games.

Other than Xiangqi, Weiqi, Prasaka, et cetera, there was also graphic content of other ancient Chinese games. A seemingly popular game was Throwing Sticks into a Flask (投壶 tóu hú). Dominoes were also explained in detail, as shown from the diagrams illustrating their names.

Many of these games are not extant anymore. Luckily, records of the ancient Chinese games are still available in Wan Bao Quan Shu.

Diagram 16 The Game of throwing Sticks and Dominoes is also found in Wan Bao Quan Shu. Image 152 from the Australian Website. (1)

Wan Bao Quan Shu is not the earliest work, nor did it contain comprehensive material on Xiangqi. But it is one of the earliest extant writings on Xiangqi and opens a window for us to appreciate what Xiangqi might have been three to four hundred years ago.

Although there were some errors in the writings, it shows that Xiangqi was very popular as it was popular enough to be mentioned in the Encyclopedia. Xiangqi was held in the same esteem as Xiangqi too.

The advice on playing the game and the various poems describing different strategies is rudimentary, perhaps even crude by today's standards. However, it is proof that Xiangqi had already advanced to a stage whereby the ancient Chinese saw the importance of theory in Xiangqi. The advice given in the poems is still surprisingly practical in the modern-day world.