The Case for “Xiangqi” over "Chinese Chess"

The Case for “Xiangqi” over "Chinese Chess"

Throughout the years of promoting Xiangqi on the internet, the Webmaster has always used Xiangqi instead of Chinese Chess. While it may seem that using 'Chinese Chess' would not make much of a difference, the reality is that there is much confusion and even chaos if 'Chinese Chess' were used. There are many valid and important reasons for doing so.This issue can be divided into the following sections for discussion:

The list given above would cover some of the reasons why using Xiangqi would be much better than referring to the game as Chinese Chess.

There are mainly four governing bodies overlooking Xiangqi activities in the world:

In all of these Xiangqi governing bodies, the official name used to refer to the game is XIANGQI.

There are many reasons for doing so, which will be explained in greater detail in the following post.

Many people view Xiangqi and International Chess to be distant cousins of each other. However, as Xiangqi is not so popular or well known in the West, there have been many mistakes made about the identity of Xiangqi. The Webmaster believes there is an identity crisis.

Take a look at the picture below. It is a screenshot that appeared on Google’s search engine after typing the phrase “Xiangqi Players.” The screenshot was taken on the 8th of September, 2020. A horizontal list of names of Xiangqi players and their photos (some were not provided) was given. Part of the list has been deleted because of the length.

There were twelve pictures in total. What was interesting was that four out of the twelve pictures, those that were crossed, were Chinese International Chess players (including Grandmasters).

For baffling reasons, Google’s almighty search engine thought that Ye Rongguang (1), Ye Jiangchuan (2), Xu Jun (3), and Xiu Deshun (4) were professional International Chess players, not professional Xiangqi players. Please click on the links to the names to lead to simple Wiki pages that would prove that these four people were not Xiangqi players.

In the Wikipedia articles mentioned above, there were already links to a ‘chess’ (International Chess) Wikipedia article. And yet Google’s search engine failed to differentiate Xiangqi from Chess. Although the statistical power would be extremely weak, we can roughly say that Google made mistakes for FOUR TIMES out of 12 times!

The confusion is disturbing and saddening for promoters of Xiangqi like the Webmaster. International Chess, Weiqi (aka Go), and Xiangqi are the three most important mind-sports in China, and there is no confusion whatsoever to their identities. With all due respect to the Xiangqi and International Chess Grandmasters listed above, Google’s search would be a disservice. It was also quite a blow to the promoters of Xiangqi.

The confusion with using the term “Chinese Chess” does not stop here. There is much ambiguity that is caused by simply using “Chinese Chess.”

The governing body of International Chess in China is called the Chinese Chess Association or CCA for short. (5).The Chinese name of the association leaves no ambiguity. It is 中国国际象棋协会 (Zhōng guó guó jì xiàng qí xiéhuì). If the Chinese name were to translate back into English, it would be:

The Chinese name of the Association would leave no ambiguity. It is called 中国象棋协会 (zhōng guó xiàng qí xié huì). Again, as in the example given above, the translation of the Chinese name back into English would be:

Hou Yifan has been in the news for the past several years. Let us see how Wikipedia introduced her. (6)

So, we ALL know that she was an International Chess Grandmaster, but was she also a Xiangqi Grandmaster? It would be hard to decipher unless the reader already had some knowledge of who she was.

Ding Liren (7) is perhaps China’s top International Chess expert at this point. How would you describe Ding?

In the Wikipedia article, Ding Liren was described using the following phrases

The following sentences were the first two sentences that described GM Ding in his Wikipedia entry:

Ding Liren (born 24 October 1992) is a Chinese chess grandmaster. He is the highest rated Chinese chess player in history and is also a three-time Chinese Chess Champion.

One of the things that the Webmaster has done was to write simple biographies of the greats of Xiangqi that are available on the site.

If introductions to Yang Guanlin, Li Yiting, Hu Ronghua, Liu Dahua, Li Laiqun et cetera used ‘Chinese Chess’ instead of ‘Xiangqi,’ imagine the confusion that would be caused. Suddenly, China would become THE POWERHOUSE in both Xiangqi and International Chess.

Most, if not all, of these Xiangqi grandmasters, were also reasonably adept at International Chess, Weiqi, Shogi, et cetera.

By the way, the Webmaster has coined the term ‘chess polymath’ to refer to experts with proven results in more than one form of Chess.

As for Xiangqi, Xu Tianli was the Shanghai Xiangqi Champion in 1957. His best result in the coveted Chinese National Individual Xiangqi Championships was in 1980, where he narrowly missed the crown to Liu Dahua. Zhang Donglu’s claim to fame in Xiangqi was defeating the then ‘invincible’ IGM Yang Guanlin back in 1958, causing Yang to lose his title of National Xiangqi Champion.  (9) (10)

Note: Zhang Donglu’s win over Yang Guanlin has been made into a video that can be assessed at the Website’s Youtube channel. The link to that game was https://www.youtube.com/watch?v=sBIOCyXfEeo.

For example, an introduction to Xu Tianli would become simply incomprehensible if the following were written:

Xu Tianli was a Chinese Chess Grandmaster who excelled in both Chinese Chess and Chess. He had defeated Russian chess master Boris Shipov in 1965. He was also the 1960 and 1962 Chinese Chess champion and was the first runner up in the Chinese Chess National Individual Championships in 1981.

Zhang Donglu was another forerunner for International Chess. His greatest claim to Chinese Chess fame was having defeated Grandmaster Yang Guanlin in 1958, causing the latter to lose the crown while Zhang was placed 4th place in the tournament. Zhang was also the 1966 winner of the Chinese Chess Championships.

So, Xu Tianli was a grandmaster in … what form of Chess? And in which year did he win the Chinese national tournament for International Chess? Or was that for Xiangqi? The last sentence would be glaringly ambiguous. The same case can be said for the introduction to Zhang Donglu.

Want to buy a set to play the game? So, what do you want to buy, a Xiangqi set of a Chinese Chess set?

Aren’t they the same?

Go to Amazon and search for Chinese Chess Sets. Depending on the offers they have on that dynamic website, you would probably find that half of the items there are International Chess sets, not Xiangqi Sets.

What about this webpage? Check it out.

It is on Etsy.com introducing ‘Chinese Chess Sets’. There are 3D chess pieces with nice carvings et cetera. Unfortunately, the vast majority of them are International Chess sets. A better description would perhaps be: “International Chess Sets made with a Chinese Theme”. To be fair, two or three items are indeed Xiangqi-related stuff. Imagine, what would happen if a person who was interested but did not know the difference between the two tried to buy a Xiangqi set online?

Solution: Use Xiangqi instead of Chinese Chess, and mention it.

The best way to prevent confusion is perhaps to write a short disclaimer to differentiate the two forms of Chess. Wikipedia’s article on Chess in China managed to do so. In the very first line of the introduction, it was written:

This article is about "international" Chess (国际象棋, guójì xiàngqí) in China. For "Chinese chess," see Xiangqi.

Over the years of translating and writing about Xiangqi, the Webmaster has encountered many similar examples. The examples listed above are but the tip of the iceberg. The Webmaster has also seen ambiguity in Chinese articles, but generally speaking, the intended meaning is much clearer in China.

‘Chess’ to the Westerner

Perhaps the biggest reason why “Xiangqi” is preferred over “Chinese Chess” is because of the semantics that the word “Chess” could mean to the Chinese and the Westerners.

To the Westerner (generic sense), Chess would be defined as such:

a game for two people played on a board marked with black and white squares on which each playing piece (representing a king, queen, castle, etc.) is moved according to special rules. The aim is to put the other player’s king in a position from which it cannot escape

Definition of Chess, according to Merriam-Webster (12):

From Collinsdictionary.com, the definition of ‘chess’ was:

Chess is a game for two people, played on a chessboard. Each player has 16 pieces, including a king. You aim to move your pieces so that your opponent's king cannot escape being taken.

The third definition would be the most ambiguous, as the same definition could also apply to Xiangqi since there were no descriptions of the chessboard or the piece. Try to read the definition in the context of Xiangqi. Luckily, there was a picture of International Chess.

The last example of the definition of ‘chess’ would also mark the similarities between the two forms of games. Indeed, if they were not defined in clearer terms, ‘Chinese Chess’ could easily be interpreted as Chinese playing International Chess. The example of Google giving wrong pictures for professional Xiangqi players would be a good testament. IT WOULD ALSO BE THE MAIN REASON WHY XIANGQI IS PREFERRED OVER ‘CHINESE CHESS’ OR THE INTENDED CONTENTS MAY BECOME AMBIGUOUS.

‘Chess’ to the Chinese and Historical Reflections

However, to the Chinese, ‘chess’ would take on a very different meaning. The modern-day translation for ‘chess’ would be 棋. And there were several other ancient chess games.

These other ancient chess games include Liubo (六博 liù bó), Sai (塞 sài), Prasaka (波罗赛戏 Bō luó sài xì), Chu Pu (樗蒲 chū pú, aka chaupur) et cetera. These chess games, although non-extant, were believed to have played a role in the development of Xiangqi. The ancient Chinese divided the games they played into two broad categories: Weiqi and other games of Bo (博戏 bó xì) where the second Chinese character would refer to games. Together, the games that the ancient Chinese played were called Boyi (博弈 bó yì). 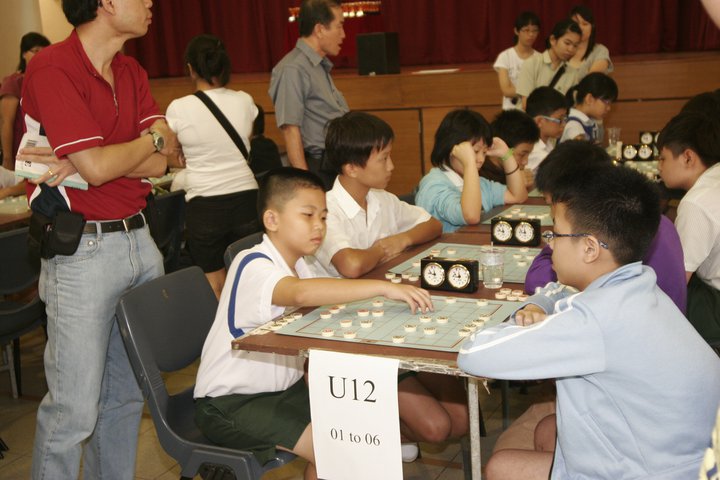 Xiangqi was categorized under the games of Bo as many scholars believe that it was refined several times from the ancient game of Liubo. There is an excellent article by my good friend Jean-Louis Cazaux on his website. (13)  The Wikipedia edition of Liubo has also improved since the Webmaster visited a few months ago. (14)

The history of the evolution of Xiangqi, with mention of the entities given above, would be presented in another article.

Therefore, while ‘chess’ would refer to International Chess in the Western hemisphere, it would mean many different things in Chinese. And perhaps the best name to use for the game would be Xiangqi as the intended meaning would become apparent immediately. Xiangqi is also mentioned many times in the ancient Chinese texts, which gives the name credibility. Using ‘Xiangqi’ instead of ‘Chinese Chess’ would also preserve the history and culture of Xiangqi.

If we were to use “Chinese Chess” to refer to the game, it could mean that the Chinese were playing International Chess, which would be the description given above.

As for the promotion of Xiangqi to the world, Xiangqi would be the best term to use. Period.

16. Coleridge, Herbert. A dictionary of the first or oldest words in the English language: from the semi-Saxon period of A.D. 1250 to 1300. Consisting of an alphabetical inventory of every word found in the printed English literature of the 13th century. Internet Archive. [Online] 1862. [Cited: Sep 9, 2020.] https://archive.org/details/adictionaryfirs00colegoog/page/n29/mode/2up.