A Brief History of the Xiangqi (Chinese Chess) Opening

A Brief History of the Xiangqi (Chinese Chess) Opening

The article would be divided into the following sections: 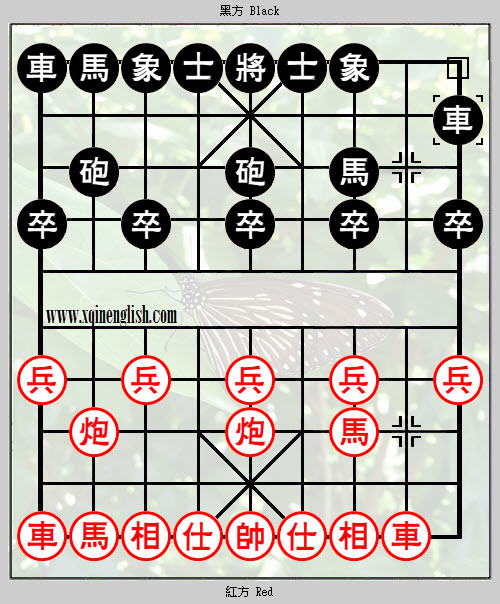 Note: Xiangqi activity went into decline during the Yuan Dynasty (1276-1368AD), and it was basically at a standstill.

Hence, one could say that from the Song dynasty to the Ming dynasty, the Central Cannon was the opening move of choice for both Red and Black. We could see some other openings like the Pawn Opening, the Elephant Opening, the Cross Palace Cannon, the Sandwiched Horse Defense, et cetera in the literature, but the consensus was that they were far inferior to the Central Cannon.

Wang Zaiyue's work changed Xiangqi. Even today, in any tournament in modern times, a great percentage of the games (usually over half of the games played) involve the Central Cannon vs. Screen Horse Defense opening system. The Same Direction Cannons and Opposite Direction Cannons slowly fell out of favor, and while they were still played, the Central Cannon and Screen Horse Defense became the opening system of choice.

In the early twentieth century, there were even more breakthroughs. The width and depth of various significant variations grew, but it was still basically the Central Cannon vs. Screen Horse Defense and the Same Direction Cannons. Some books from this turbulent period (1900-1950s) and modern-day opening theory slowly began to take shape.

In 1956, which most historians designate as the beginning of modern-day Xiangqi, the first-ever Chinese National Xiangqi Individual Championships was held. The event marked a considerable advance in Xiangqi as a whole. In the case of the Xiangqi opening, competitors started exploring new openings and variations. While it took some time to gain momentum, by the 1980s, Xiangqi openings had already reached another stage in the evolution of the Xiangqi opening. Previously condemned openings and counters were given a new lease of life.

In modern-day competition, while the Central Cannon versus the Screen Horse Defense is still the most commonly seen opening system, there are many other opening systems like the Pawn Opening vs. Thundering Defense et cetera, which have gained much popularity. Openings and counters that were previously deemed inappropriate or not viable in ancient times were given a new life as tremendous advances were made in opening theory.

Grandmasters and masters have contributed much to the depth and variety of Xiangqi openings. Amongst them, Grandmaster Hu Ronghua is credited to have revolutionized and made the Elephant Opening a viable choice for Red to start the game. He also refined the Sandwiched Horse Defense to become a plausible counter against the Central Cannon. As China was just opening its doors to the world in the 1980s, GM Hu's Sandwiched Horse Treatise was one of the first books Westerners came into contact with. That would explain the counter's relative popularity, as it was significantly praised in Sam Sloan's book. It is still very often seen in competition to this day.

Another Red opening that became immensely popular in modern-day Xiangqi is the Angel's Pawn. There have been major breakthroughs in this opening as Red, and it has been the favorite opening of choice by many grandmasters and masters alike. For example, grandmasters Hong Zhi, Zheng Weitong are known for their expertise with the opening. Today, the biggest threat to displacing the Central Cannon opening as the opening choice for Red would be the Angel's Pawn or the Elephant opening.

If modern-day Xiangqi openings were compared with their ancient counterparts from the Ming dynasty, one would see that there was a shift in the general strategy. There is more emphasis on the formation of an attack or defense. The word 'formation' can be thought to be similar to the term structure, but it would be a more accurate translation of the Chinese term 阵型 （zhèn xíng）. Besides, the term 'structure' would seem to imply Pawn structures in International Chess.

Instead of big and bold attacks and kills, modern-day Xiangqi is more concerned with positional play and emphasized control for most of the variations. There are still variations like the Charging Bull Variation that emphasized a rapid attack by pushing the central Pawn forward very early in the game. Still, generally speaking, most modern-day openings and variations are more subtle and deliberate. Modern-day variations are much more complex and more profound than the variations given in the ancient manuals from the Ming and Qing dynasties. The room for error is also much smaller, and small mistakes are more punishable.

In the twenty-first century, computer programs to help analysis have also rapidly seen an improvement in the Xiangqi opening. Flying daggers (the Xiangqi term for an opening novelty) are seen in every tournament, and there would be counters for the same flying dagger the very next day. (1) (2) (3) (4)

What the ancient manuals have to offer about the opening

Although much of the ancient manuals' advice about various openings would be grossly outdated, it is still mandatory to know the advice for a firm foundation in opening theory.

Listed below are some of the advice, in the form of Chinese poems from the Secret in the Tangerine. The interested reader is recommended to go through the English versions that the author has also translated.

The following is a collection of poems and advice on the opening from the Secret in the Tangerine.

Tips for the Central Cannon

Starting with the Central Cannon is better than the other openings.

The Horse(s) would have to protect the central Pawn while the Advisors defend against enemy attacks along the central file.

The Elephants (weaknesses on both flanks) need protection from the Chariots, while the Pawns can be used to attack from both left and right.

If the Cannon is ready to attack the enemy territory, the Horses must follow and cross the river not far behind.

Tips for the Palcorner Cannon

Place the Cannon at the palace corner while the Chariots attack from the external rib files. The Cannon would follow the Cross-River Chariot, and not far behind must the Horses be found (attacking as a Horse-Cannon combination).

The Chariots would try to take out the enemy Advisors and Elephants. The Horse would act as Cannon mount while charging forward, and together, they charge forward.

After cracking open the enemy defense, capturing the enemy king would be an easy task!

Tips for the Flying Cannon

Start the Cannon on the edge and attack the Pawns for the initiative. With the aid of a Central Cannon, the Edge Cannon could press forward and even occupy the boardcorners. The enemy Advisors would be easy prey, while the enemy Elephants would be easily caught off-guard. For the final onslaught, the Chariots are needed, and the majestic steed may be a surprise.

Tips for the Elephant Opening

The Elephant at the center would guarantee peace, and the Advisors must be linked. The Chariot should assume its position on the riverbank, providing cover for the Horses from behind. Beware of the enemy commanding the Elephant eyes, and the central Pawn should not be charged forward. When all is ready is the Cannon allowed to join in the attack, and the enemy would be defeated from the flanks.

Tips for Defeating the Elephant Opening

Place one Cannon on the central file and attack with the centrally linked Horses. A Chariot placed on the riverbank would do wonders, while a central Pawn would rush forward.

Move the Chariot to block the enemy Elephant's eye, and place a Cannon behind (the Chariot).

Use the Horse to trade for the two enemy Elephants, and one would have a position worthy of a hero. (4)